“This is an enchanted place. Others don’t see it, but I do.” The enchanted place is an ancient stone prison, viewed through the eyes of a death row inmate who finds escape in his books and in re-imagining life around him, weaving a fantastical story of the people he observes and the world he inhabits. Fearful and reclusive, he senses what others cannot. Though bars confine him every minute of every day, he marries visions of golden horses running beneath the prison, heat flowing like molten metal from their backs with the devastating violence of prison life.

The goal of Rochester Reads is to encourage people to connect to others in the Rochester community through reading and discussion. Each year, Writers & Books selects one book for our community to explore together, leading to an extended residency by the author.

I enjoyed last years experience so much of reading Queen of the Fall and then meeting the author Sonja Livingston, that at the time I decided I would write about the Rochester Reads events and book selection as long as I have this blog. But that was before I read The Enchanted by Rene Denfeld. I really debated for a long time about if I even wanted to share this book.

About 2 and a half weeks ago I checked the reviews for The Enchanted on Goodreads and I thought I was in for a treat, this thought-provoking novel has a solid 4.5 rating. I placed my hold at my local library, and a couple of days later picked it up, ready to dive in.

The Enchanted blurs the line between reality and fantasy. Set in a crumbling ancient prison that is still in operation, inhabited by broken people of all sorts. Denfeld writes with poetic beauty, about 3 central characters.  “The Lady” an unnamed death penalty investigator,  a clairvoyant mute who will not speak because his past is so unpleasant, and “York” the death row inmate on the verge of execution. This book is remarkably well written, but by design, it was also meant to be intrusive and uncomfortable.

This is a dark book and references heavy topics. There are mentions of sexual abuse, rape, and violence, and it does take place on death row, so I believe the mention of some form of human evil and cruelty is to be expected. It was not done in a graphic manner, but I still found it deeply troubling. I read before bed, and at times after reading a passage I was left feeling my nerves were raw and agitated, and it would take me a few days before I could pick up the book again to read some more. Almost as troubling as the crimes that are mentioned, are the ones that aren’t. Not only did the author choose to leave her characters unnamed, she rarely revealed their crimes that landed them on death row. I am positive this was an effort by the author, for the reader to see the inmates in their current situation, and not for their crimes. This book does have an agenda. Denfeld holds much the same position as one of the main characters in the book, “the Lady” who investigates the validity of the inmate’s sentence. So, this does seem to be a somewhat personal crusade for her. The death penalty is a hot topic that I am not going into here, but I found the overlooking of the crimes disagreeable, Denfield did reveal some of the inmate’s histories, which was riddled with poverty and abuse. Why should we only be subjected to the abuses against the inmates in childhood, and forced to ignore their own transgressions? I found the whole approach unnerving.

I found The Enchanted unrelentingly depressing, dark, and vague. The ambiguity, instead of compelling, left me without feeling any real connection to any of the characters or the book itself. The struggled with the magical realism, and I desperately kept trying to separate the reality of the book from the “Enchanted” world within the prison. I think this is definitely a “case of it’s not you, it’s me” as clearly the majority of people who read this book found some sort of enjoyment or satisfaction out of it. This is not a book I enjoyed.

All that being said, I do think I will go to one of the author’s discussions about the book. It will be interesting to hear her perspective on writing this book. There is several readings and signings coming up this week, many with free registration.

There are several readings and signings coming up this week, many with free registration. See the Writers and Books Website for Schedule of events. 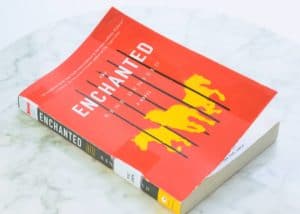 Are you on Goodreads? If you’re a reader, it’s a great way to keep track of your books, both read and want to read, keep tabs on your favorite authors and connect with other readers. You can find me and my crazy list of books I want to read there, let’s be friends!