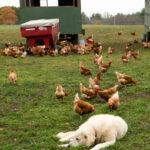 When it comes to keeping chickens safe from predators, a Livestock Guardian Dog (LGD) is often the best protection. LGDs are bred and raised to be predator-savvy and are extremely territorial when it comes to their charges. There are many different breeds of LGDs, each with its own set of talents. So, which one is right for your homestead? Check out this guide to the best livestock guardian dogs for chickens!

Starting your own chicken farm at home can be exciting. But you might be wondering how you will keep your chickens safe from other people and predators. There are actually dogs that can do this for you! These are the livestock guardian dogs.

In the past (and still today) farmers put all of their trust in dogs to help keep their livestock safe and together. They relied on dogs like shepherds to safeguard and herd their flocks. A herding dog could round-up sheep, pigs, goats, and cattle. But they could also keep a watchful eye over chickens and protect them from predators.
Many types of dogs can fulfill the role as a livestock guardian dog. Some are classified by the AKC under the working group while others are classified by the UKC under the guardian group. Each type of dog is totally different even though they have a similar role. The dog you get for your chickens at your home will depend a lot on the lifestyle you have and whether the dog’s temperament meshes with your own. Here we’ll show you three of the best guardian livestock dogs so you have a better idea of which dog breed is best for you.

What is a livestock guardian dog?

Livestock Guardian Dogs (LGDs) are dogs that are made to work with farmers and protect the livestock on the farm. They can guard all different kinds of farm animals, from large cows to tiny chickens.
Most LGDs are medium-to-large dogs that are strong but gentle and calm. They have to be able to watch the flock all day and keep it together but also protect the flock from any dangerous predators such as wolves, coyotes and foxes. LGDs must also be able to work for long periods of time outside in any condition during the year. That is why many of them have thick coats that can tolerate any weather.
The typical LGD is calm and patient but alert and strong. It must be comfortable with spending its time alone with the livestock but also be always watchful and bring out its strength when the time comes for it.

The Kangal Dog is an ancient breed that is named after the Kangal District of Sivas in Central Turkey from where it likely comes from. This sturdy livestock dog has been used for centuries by farmers, and is even considered the national dog of Turkey.

The first Kangal Dog came to the United States in 1985. Though the breed is still not recognized by the AKC, you can register it with the UKC and Kangal Dog Club of America and many farmers in America are adding this dog to their farms.

A Kangal Dog is a very large and powerful dog with a heavy-boned structure that is practically immovable. This dog uses his impressive physique to stand his ground when confronted with any perceived threat. Its distinctive qualities are its longer body than tall, its tail that curls up, and coat. The coat has two layers. It is short but very dense in the winter and light in the summer when the undercoat sheds. The color of the coat must always be solid, and ranges between a light dun, or a pale and dull gold, or a steel gray. It also has a black mask and black hairs over its flopped ears.

Typically this dog is very alert, protective and territorial. With the family it is very loyal and sweet but any suspicious outsider better beware because they will be getting the side-eye from this dog. It will confront threats when it needs to but it prefers to intimidate its enemies. Strangers, predators and stray dogs will not be able to touch the chickens under this guard dog’s watch.

The Great Pyrenees is one of the most popular LGDs and possibly the most commonly used in America. It is also a really old dog that originated from the Pyrenees mountains in between Spain and France. There it worked along farmers to keep the flock safe against any predator.

This majestic dog has a white and dense coat that was likely made to withstand the cold winters in the tops of the Pyrenees mountains and blend in with the snow. The Great Pyrenees was legendary for its immense patience and ability to immediately spring into action to defend their flock.

Though the Great Pyrenees appears very mellow with its calm demeanor and fluffy white coat, this giant dog has a strong body that can weigh over 100 pounds. It will knock anyone over if threatened and its courage to guard is unmatched. You can depend on it to take care of your chickens and it won’t mind so much all the clucking because of its patience.

A Great Pyrenees makes an excellent family dog for its calmness, intelligence and friendliness. But families need to give this dog a job like watching the chickens if they are to add it to their home.

The Anatolian Shepherd originates from Anatolia, the peninsula that makes up the Asian portion of Turkey. It is another very ancient breed whose ancestors can be traced back to 2000 b.c.

The breed was first brought to America before World War II in a secret mission called the “Sheepdog Project” with the objective of determining which breed would be the best sheepdog. But this program collapsed with the breakout of war and the Anatolian Shepherd did not gain recognition again in America until the 1970s. A this time the Endangered Species Act had been enacted and the Anatolian Shepherd was the perfect candidate for protecting livestock without harming endangered predators like wolves.

Farmers love the Anatolian Shepherd for its independent and patient nature. It can be left for hours alone with the livestock and it will be happy. The Anatolian Shepherd, while very loyal, is actually not as affectionate with humans as the other two breeds and is very reserved. But it shows its loyalty by protecting not just your chickens, but also alerting your family of any strange happenings.

The huge Anatolian Shepherd, being able to reach weights of 150 pounds, is quite an imposing figure when standing guard of your flock. They are incredibly muscular but agile, have a curled tail, and have a short coat that is slightly longer on their neck. Coat colors are many and include fawn, liver, brindle, white, red fawn, biscuit and white, and blue fawn. Markings like a black mask and ears or white on its chest or paws are also acceptable.

Livestock Guardian Dogs are bred to work at a farm and protect the livestock of farmers. The Kangal Dog, Great Pyrenees, and Anatolian Shepherd are three of the best LGDs that you might want to consider adding to your home if you need a dog to guard your chickens.
Each one of these breeds is incredibly unique and the one you choose depends on factors like its family friendliness and personality. The Great Pyrenees might be the best for a family with children but if you are out all day then the Anatolian Shepherd won’t mind.

Nevertheless, they are excellent guard dogs of livestock. Whoever you choose you can rest-assure that your chickens will be safe from both natural predators and other humans.