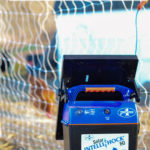 The Premier 1 Electric Poultry Net is an effective poultry protection system and powerful pasture management tool, but it is not without its quarks. Bugs, wind, and weather can be problematic with a solar-powered fence system, but managing these situations isn’t difficult if you are aware of them. I am sharing what I learned during my first year using the Premier 1 PoultryNet® Plus and what I wish I had known sooner.

During the Spring of 2021, on a quiet Sunday morning, I witnessed a fox attack on my flock that left me feeling shocked and with the full realization that if I was going to keep chickens, I needed to step up my flock protection program.

I bought Premier 1 PoultryNet® Plus kit with one additional roll of 100-foot netting to protect my flock. It is still the most significant investment I have ever made into my chicken-keeping hobby. When someone comes to the farm or asks about how I manage predators, particularly foxes, the fencing unit always comes up in conversation, and there are usually a lot of questions.

What is The Premier 1 PoultryNet®

If you aren’t 100% familiar with the Premier 1 PoultryNet system, it’s a 48″ electrifiable prefabricated fence. It arrives at your door as a complete roll with posts built into the mesh/fence. A solar powered energizer and battery are attached to the fence to electrify it. It is an extremely effective solution to keep livestock confined and protected from predators. Set up is simple, and you can select different configurations for permanent or temporary placement.

Keep your chickens out of harms way and your backyard chicken coop protected with the Premier 48" PoultryNet Plus Starter Kit. This kit contains everything you need to fence poultry, including a convenient starter pack that includes five galvanized steel posts for easy installation into any soil type or surface material. The netting is lightweight yet durable enough to stand strong against coyotes, foxes and other land predators looking to make a meal out of your flock! 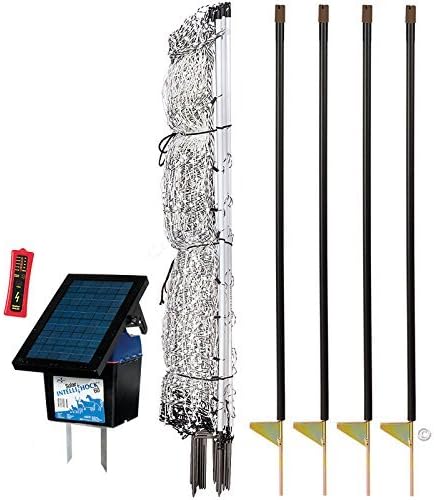 Buy Now
We earn a commission if you make a purchase, at no additional cost to you.

I often tell people that the only reason I have my flock today is because of the solar-powered electric netting. I firmly believe that without it, my entire flock would’ve been wiped out by a family of foxes who turned my backyard into their hunting grounds. But it hasn’t always been smooth sailing with this system.

If you’ve started researching the PoultryNet® you are probably aware that there is basic maintenance that will need to be done to keep your fence in good working order. Things like managing weeds and vegetation along the fence so they will not drain the battery are frequently talked about in reviews and troubleshooting videos and articles.

I thought I spent a fair amount of time researching electric poultry fencing, but found there are things no body is talking about, that should be talked about.

Here is what I want you to know before you buy a Premier 1 Supplies PoultryNet® Plus kit:

Bugs Can Ruin The Computer Board in Your Energizer

After reading this post, if you employ only one preventative measure, let it be this! Put some bug deterrent or killer in the base of your energizer case! And do it before you have a problem.

When I purchased my fencing kit, I thought to put mothballs in the energizer case to deter bugs and small rodents from making a home in the case. I didn’t put any repellant in the case because I assumed it was designed to be outside. Surely, it must be sealed for the elements and bugs.

A couple of months into using my new PoultryNet® Plus kit, my energizer began acting up. The energizer blinked sporadically and charged the fence erratically. When I called Premier 1 customer service, the representative walked me through testing the battery and opening up the case to access the computer board to inspect it visually.

When I cracked open the computer board’s case, earwigs scattered and slithered in every direction. The representative told me bugs would destroy the computer board and are the only cause of failure not covered by Premier 1’s warranty. I bought a replacement computer board and was back up and running by the end of the week. But the fence failure could have been avoided had I known to put a bug repellant in the case.

The representative told me going forward to sprinkle a little Ortho Home Defense Insect Killer Granules into the bottom of the energizer case, being careful to avoid connections or the computer board as it is slightly corrosive. The insect killer has kept my energizer case bug-free. I occasionally check the internals of my energizer case and computer board to make sure there aren’t bugs, and the granules are still in place.

Adding the insect-killing granules right when I set up my fence would’ve saved me $75 and about a half of a day troubleshooting.

On a positive note, the fact that cloudy days aren’t as problematic as I initially thought they’d be was a pleasant surprise! Solar panels still work even when clouds partially obstruct the sunlight, although their energy production capacity will be diminished. After about four cloudy days, your probably going to want to plug your energizer into an outlet with the provided AC power adaptor and charge your battery though.

Autumn Leaves Can Be an Issue

We have several mature trees in our yard, particularly around the chicken coop. I placed the coop in an area surrounded by trees to shade the coop in summer and offer a windbreak during winter. Dealing with the accumulation of leaves in the corners and at the fencing base was a daily struggle. The leaves added a lot of weight to the fencing, and even a slight wind caused a lot of bowing and stretching.

Eventually, I took the whole fencing unit down before a predicted high wind storm. I stored the rolls of fencing and the energizer away in the basement for a couple of days until I could adequately deal with the leaves and the cycle of high wind systems moved out of our area. By that point the foxes how had been frequenting my yard realized they weren’t able to pick off chickens as easily, and had stopped lurking, but I was still incredibly nervous to take my fence down. I just didn’t want to risk damage to my fence by all the weight of the leaves and force of high winds.

Electric Poultry Netting is Safe for Your Birds & Doesn’t Distress the Flock.

Aside from the price of the electric poultry net kit, the most significant initial concern that prevented me from purchasing the fencing sooner was my concern that might be a cruel way to contain my birds. I wondered if they wouldn’t understand the fence and frequently get shocked? Would it hurt them? Would it make them more flighty or skittish?

If you are hesitant to get an electric fence system for chickens because you are worried they aren’t safe or a distressing way to keep chickens confined, let me ease your mind. I didn’t notice any distress within the flock. After free-ranging for most of their lives, adjusting to confinement took a couple of days, but their space had lots of room with outdoor perches, dust bath areas, and shade. Chickens feathers are good insulators, so they get zapped only when they touch the fence with their feet or combs.

You May Not Get Year-Round Use Depending on Your Location

If you live in Upstate New York, I don’t have to tell you the days are short during winter. We are all painfully aware.

But what I didn’t consider when I bought my solar-powered fence was that the 9 hours of daylight we typically receive during winter isn’t going to be enough to charge your energizer for 24-hour use.

The shorter days will cause the battery not completely to recharge each day. If you have a secure coop, you may want to turn off the fence at night and only run it during the daylight hours while the flock is out and about, or the coop doors are open during the winter months.

To help offset the lack of daylight hours, you can position your solar panel facing the south to maximize sunlight. It is also important to sweep the snow and ice off daily! Snow accumulation can completely block any sun from reaching the panel.

It is also good to keep a spare battery if the current one needs to be replaced in the middle of winter.

During winter, another issue you may run into is that the frozen soil might not sufficiently ground the energizer. The water in the soil is a great conductor of electricity. Your fence relies on a certain amount of moisture in the earth to function correctly. Ice is not a good conductor of electricity, and as the ground hardens up and the water in the soil freezes, you will lose your ground.

You can counteract the grounding challenges during winter with these tips:

Despite its weaknesses listed above, solar-powered fencing offers several benefits to livestock owners. Solar-powered systems are very effective at protecting your flock from predators. At some point you will likely want to expand your flock’s pasture area. Purchase a larger energizer than you think you want; This will give you the ability to add on additional fencing sections. And, as a bonus, if you purchase a charger that’s stronger than the bare minimum you need, weeds and grass growing along the fence line will become less of a problem too.