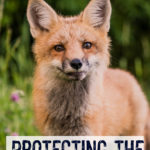 Red Fox in the Cow Pasture

We have had our fair share of dealings with foxes around the farm, so it was no surprise to my husband and I when we ran across a small red fox out for an early morning hunt in the cow pasture while we were out checking calves.

I zoomed in quite a bit to get some pictures. I am always cautious around wild animals, especially foxes. There have been reports of fox attacks on humans lately, like this one in Otego New York, most likely caused by a rabid fox.

This Red Fox looked healthy and was behaving normally. He is actually very effective at controlling field mice populations. Foxes are generally very shy, and avoid humans, they aren’t considered dangerous to humans, except when they are rabid. Even though foxes aren’t interested in humans they are very interested in poultry, and can wreak havoc on a backyard flock, especially if your birds are allowed free range.

What are the signs of rabies in foxes?

“The first sign of rabies is usually a change in an animal’s behavior. It may become unusually aggressive or tame. The animal may lose its fear of people and natural enemies. A wild animal may appear affectionate and friendly. It may become excited or irritable and attack anything in its path. Staggering, convulsions, choking, frothing at the mouth and paralysis are sometimes seen. Many animals will make very unusual sounds. Infected animals usually die within one week after showing signs of rabies” ~Centers for Disease Control & Prevention

Protecting The Chicken Flock From Foxes

Sly and intelligent, foxes will stalk your flock without notice until they’re ready for a swift, clean attack. Foxes have truly been the biggest threat to my backyard flock, as far as predators go.

Foxes are clever and they’ll strike when your guard is down. They’re smart, and they learn quickly. They will learn your daily schedule and take advantage of any opportunity to grab an easy meal. Once they’ve had a taste of chicken, they’ll be back, often daily to pick off a bird until none are left.

If you live in a rural area it is important to protect your flock from fox attacks long before you ever have a problem.

Here’s how we’ve recently dealt with a fox that became a problem to our flock of backyard chickens and ducks.

Fox use the cover of hedgerows, tall grass and brush to sneak up and gain access to unsuspecting flocks. In the interest of keeping our yard & pasture area a low-target zone, we mow grass regularly and keep brush cut back to reduce the cover that foxes use to hide while hunting.

Add Physical Barriers Between The Flock and The Fox

Foxes are able to both dig under and climb over inadequate fencing, as well as find and squeeze through gaps in housing. Protection against fox attacks should include a fence at least 5-6 feet high, and a 12” trench all the way around the perimeter of the chicken coop and run with buried wire mesh hardware cloth to prevent a fox from digging under. An alternative to a trench is to extend a 12” apron out from the perimeter. An apron isn’t as effective as a trench, but will provide some measure of security from digging predators such as foxes

When your chickens are out in a pasture a solar powered electric fence is a good way to keep your flock contained in a specific location, and protected from foxes and other predators.

Chicken wire is somewhat useless with fox because of their ability to chew through thin metal, always opt for the heavier hardware cloth

Our family dog has really stepped up to the plate and fulfilled the role of a livestock guard dog. While our pit bull mix will never be a full time livestock guard dog, she has chased more than one fox out of our yard. I like to get the dog out in the yard to walk around the flock at irregular times throughout the day, her presence around the flock has greatly reduced the number of attempted fox attacks.

Removal of the Fox From the Property

When foxes become a nuisance in New York State you can legally “take” the animal without a permit or special license. To be considered a nuisance the fox must be damaging your property, or threatening your safety.

“Take” or “taking” a nuisance animal means to pursue, shoot, hunt, kill, capture, trap, snare, or perform acts that disturb or worry wildlife, and I do consider this a last resort, but when a fox becomes emboldened and is relentlessly stalking our yard, it is in everyone’s best interest if he finds a new home.

When we do have issues, the removal of foxes is best left to the professionals. We work with Frogger Wildlife Consultants, a local family owned and operated wildlife removal service. Based outside Rochester, they have been serving the Rochester area and The Finger Lakes Region since 2005.

This was an interesting read! Do you have coyotes nearby at all? They are here, and very emboldened.

Rachel @ I Love My Disorganized Life

Just the thought of coming into close proximity with a rabid animal makes me nervous! Thanks for the insight as to what the signs are for the disease. We don't have any foxes where I live, but plenty of coyotes and mountain lions!

I know I am borderline paranoid about rabies! I always make sure the dogs are with the kids when they play outside. I can not even imagine having mountain lions, I remember reading about a biker who was pulled of his or her bike by one!