Yesterday I told you about Rosie, one of a set of twin calves that were born on Saturday afternoon. I am very happy to report that she is doing awesome, and has been bouncing around her now shared stall!

We had to unfortunately bring her sister in with her also. Separating our calves from our cows is a last resort here on the farm, so it was not a lightly made decision, but twin #1 was failing to thrive. Her and her mother were not connecting, and she was rapidly declining. 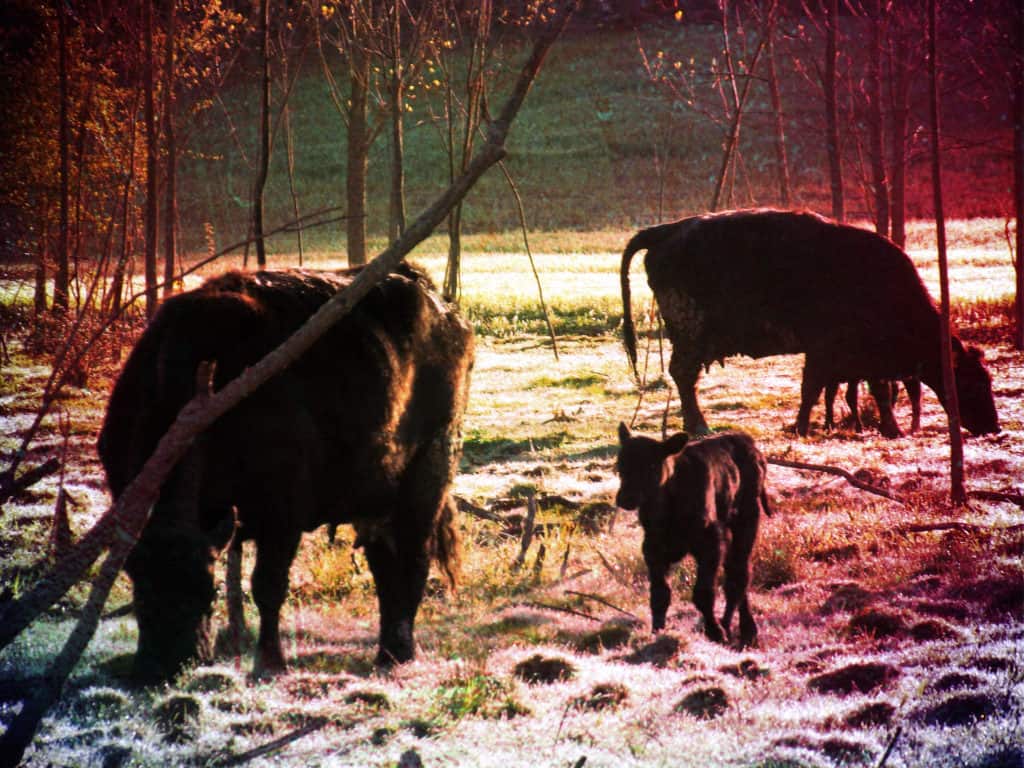 While were very focused on getting Rosie squared away, We kept a very watchful eye on her sibling who stayed with her mother in the pasture. Rosie was rejected by her mother shortly after birth, so my husband and I brought her into the barn to bottle raise her. It seems like my husband and I spent the entire day Sunday in the pasture, watching Rosie’s mother and sister.  My husband’s gut was telling him something was not quite right, but the calf was alert and mom was always close by. Even though we had spent a lot of time watching to see if she was feeding from her mother, we never actually witnessed it. My husband gave her a shot of Vitamin B, and a bottle of colostrum in the pasture.  After about half of her bottle she had renewed interest in feeding from her mother, and started trying to feed from her. We left the pasture, hopeful that she just needed that little extra boost to get things going.

Late Sunday night my husband found Rosie’s sister, bedded down in some tall grass. She was weak and lethargic, there was no other option than to bring her into the barn also.

Once reunited with her sister, she was given a feeding, and settled down for the night. We left the barn not sure what we would return to in the morning. We hoped for the best, preparing for the worst. The stats for twin calf survival is not great when compared with single calves, 20 % twin calf mortality rate  vs. 3.4 % in singles1 That is always kind of hanging in the back of your head.

Monday morning we returned back to the barn bright and early, 5:30 am actually. Rosie was up and around and excited to see us. Her sister, who the kids have now named Sissy, was still resting. I was happy to see she made it through the night, but Monday morning she clearly was not out of the woods by a long shot.

Rosie gulped down her bottle, and pranced around the pen wanting to play. She kicked up her heels, nuzzled her head against my leg, and was full of life.

Sissy was another story, in the pen I could see she was clearly bigger than Rosie, but looked frail and tired. She refused her bottle, we had to feed her with a calf feeding tube. We got her meal into her, but the process clearly drained her even more. We left her resting, again hoping for the best.

A few hours later when I went down to check on the girls. I was so happy to see both Rosie and Sissy up and around in the pen. Rosie was being a typical rambunctious calf, you would never be able to tell a day ago we were questioning if she would even live. Sissy was not as lively as Rosie, but had made a vast improvement.

When it was time for the evening feeding we brought the kids down to the barn to help out. They were thrilled to see Rosie and Sissy, they laughed at Rosie’s antics, and gave Sissy lots of attention.  My daughter enjoyed giving Sissy her bottle, I was just so relieved she actually took the bottle this time.   She finished her bottle without any problems and laid down to rest next to her sister.

Sissy getting her bottle

We would always rather the calves be with their mother, but in this situation I was glad the twins were back together.

1TWINNING BEEF CATTLE: a report on a visit to the US in March/April 2009  Duncan Smeaton, AgResearch, Hamilton, New Zealand  30 July 2009

Hi Jennifer, I'm so glad you linked up with the Farmgirl Friday Blog Hop. I hope your little twins grow and that their mother will straighten up and be a mother. A cute story. I do want a cow. Thanks for sharing this. I now follow you sweet new friend.

Thank you Dolly what a great Blog Hop you host! I really enjoyed it!

I love cows, they were always my favorite thing about my granddaddies farm. Glad your calves are doing good, I just hate to see animals sickly.