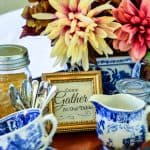 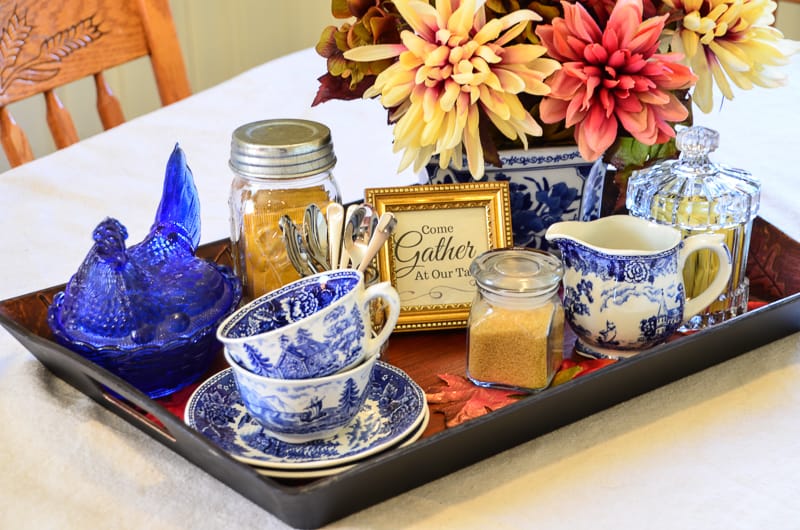 You know all those super pretty coffee stations all over Pinterest right now?

Yeah, I wanted one. BAD.

In fact I even bought a vintage buffet to refinish for my new coffee station.  I knew where I was going to put it, had shelves picked out, could see it all, and it was going to be beautiful!

One night while talking about my plans for the coffee station with my husband, he said “is there an outlet on that wall?”

To which I replied:”pfft, yes!”. But in my head I knew there was a strong possibility there really wasn’t.

We live in an OLD farmhouse.

In case you don’t know,  Old farmhouses = bad electrical, plumbing and lack of closets. We actually got all the plumbing straightened out pretty quickly, and most of the electrical wiring has been updated, but no other outlets have been put in since the house was probably originally outfitted with electric.  Which means there are roughly about 2 outlets per room.  And the particular wall I was envisioning setting up my coffee station against has had a large piece of furniture against it since we moved in. I haven’t seen that wall bare in a LONG time.

But I decided to peek behind my china cabinet and see if there was an outlet.

Because this coffee station wasn’t supposed to turn into a major house renovation calling an electrician was out of the question.

Second problem with living in an old farmhouse, there is no such thing as a simple update. Opening a wall is like opening Pandora’s box, you have no idea what you are getting yourself into.

I was still stewing a few days later about the lack of an outlet, but while shopping for a new toaster at Wal-Mart this  Better Homes and Garden Maple Tray caught my eye. I wasn’t sure if it would work at corralling all of our coffee fixings, but for $7.48 it would get used somewhere in my house, so I snapped one up. I should’ve bought two, I love it!

I came home and started loading my new coffee tray with all sorts of caffeine related goodies. 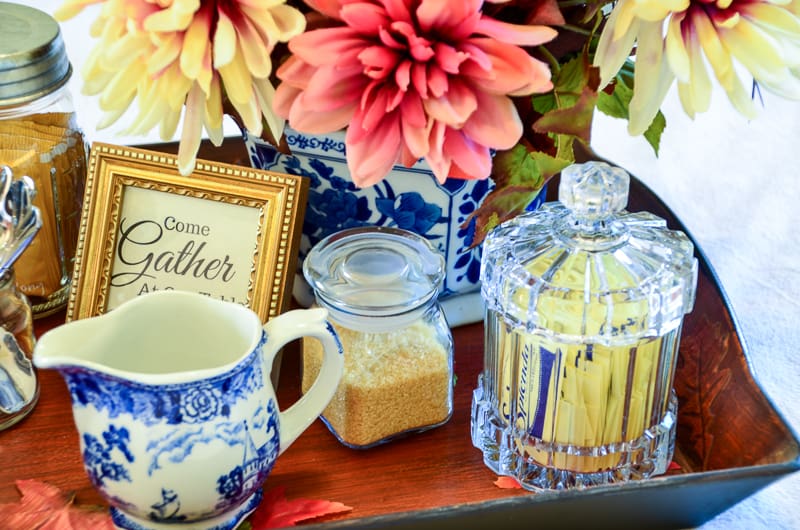 My father’s Splenda, our sugar in the raw, a decorative planter I filled with some artificial flowers, all got loaded on the tray first. 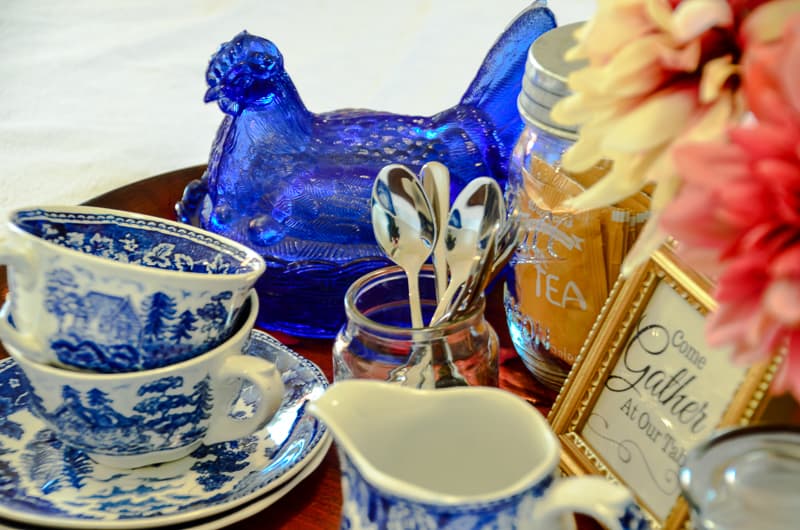 My Arabia of Finland teacups and creamer, the kids broke the sugar bowl 🙁  I also added these adorable  Stainless Steel Espresso Spoon Teaspoons  in a small glass jar.

And, where my blue and white transfer-ware goes, so does my decorative hen on nest covered dish. I love them together,  I tucked some breath mints in there, and sat her in the corner to watch over things. 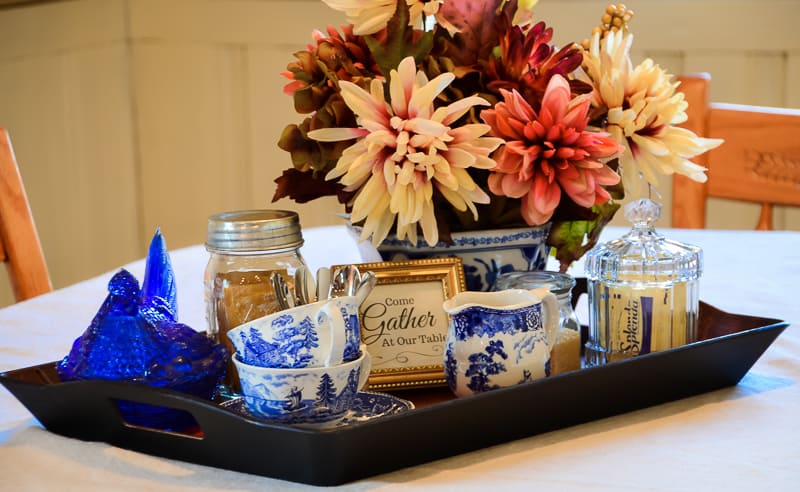 And to finish it off added a little sign that I made that reads ” Come gather at our table”. I actually picked up the frame at Goodwill, there was an illustration and quote that read, “Chance made us sisters, hearts made us friends.” If you are wondering, no I don’t have a sister, I just liked the little frame! I pried the frame apart, printed up “gather at our table” on card stock and popped it in there, I think I might change it up for Christmas!

I am still a little bummed my original coffee station idea didn’t work out, but I love my little tray solution. It is portable, so I can move it from the counter to the dinning room table easily. I really think it will be perfect for entertaining, or when we have house guests!

So you have a coffee station? What’s on yours!

I love love love your coffee station!! I love the color theme and everything on it! Great idea with the frame. I'm going to have to steal your ideas for when I have houseguests stay over!

Thank you Gigi!! I am looking forward to dressing it up for Christmas too!