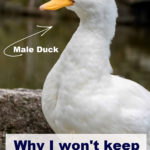 There is a lot of discussion about keeping roosters in your backyard flock, but you don’t hear much about keeping a drake or male duck. Drakes aren’t as loud as roosters, in fact they are incredibly quiet, but they are not without their problems. My first duck flock was bought straight run from a feed store and was made up almost entirely of drakes, so I’ve had a little bit of experience with male ducks in a mixed backyard flock.

Today I am sharing my personal experiences with keeping male ducks in my backyard flock, and why I have decided that my flock does best without a drake in the mix. Obviously every bird, and flock are different, and this may not be your experience.

When I first heard that duck mating is unpleasant, I instantly brushed it off…I live on a farm afterall, I’ve seen a lot of natural behaviors that could classify as less than pleasant. But duck mating is extremely aggressive, and takes place several times a day.
Male ducks have very high sex drives, they also can be very rough on females. If you keep multiple drakes, mating can be down right horrific, because often when one male notices another male mating the others will run/swim over to join in while the female is restrained, resulting in her injury or even death. Missing feathers from the neck, head, and back, along with large to small cuts and sores from the drake’s claws or bill, or even death can happen when a female is over-mated.
The recommended ratio of drakes to ducks to prevent overmating is 5-8 ducks per drake! This gives you an idea of just how high of a sex drive male ducks have.

Drakes Will Attempt to Mate With Chickens

If you are also raising chickens and are planning on having a mixed flock you need to know that drakes may even attempt to mate with chickens, which can be highly problematic. Waterfowl are one of the few birds that actually have penises. Drakes have long corkscrew mating organs that stay tucked within the duck’s body until it’s time to mate.

Rooster’s on the other hand do not have penises, nor is the female chicken reproductive tract designed for penetration. A drake attempting to mate with a hen is very dangerous for the hen and can actually kill her.

Drakes Can be Aggressive Towards Humans

Drakes seem to be ruled by hormones, and the cause of drake aggression can usually be traced back to one of two reasons: he feels dominant and he’s attempting to be the boss, or he wants to mate you. Both of these scenarios are completely unacceptable in my book.
If your drake is displaying his perceived dominance over you, there are ways to handle the situation. For me personally though I keep ducks because I enjoy having them around and taking care of them. If a drake takes away that enjoyment, I won’t keep it.
If you get ducks, and plan on keeping a drake around for the long term you need to be prepared for the potential of aggressive behavior.

Drakes will Attack and Kill Ducklings

This can probably be chalked up to another hormonal natural instinct, but drakes and ducklings do not mix. A male duck’s most basic instinct is to find a mate to produce offspring, it’s why they have the crazy sex drives we’ve already talked about. Unfortunately, some male ducks view ducklings as a threat or obstacle to their goal of procreating, and will attempt to kill ducklings. An all female flock of ducks is pretty mellow when it comes to introducing new members, and I am all about a no drama flock!

You Don’t Need a Drake For Egg Production

Just like chickens, ducks don’t actually need a male companion to produce eggs, female ducks will produce eggs with or without a drake around. The ducks will produce an equal amount of eggs with or without a drake, they will just not be fertilized if you choose to not keep a drake. If you intend to hatch your duck eggs into baby ducklings you will need to keep a drake.

For Me Keeping Drakes Is Not Worth the Trouble

I keep a mixed backyard flock because I enjoy taking care of my birds and being around them. Any bird that takes away that enjoyment, harms any of the other birds, or thinks he is going to intimidate me or makes it difficult for me to enjoy being around my flock doesn’t have a place in my coop. It’s as simple as that.

This has been my experience with keeping drakes, obviously every bird, and flock are different, and this may not be your experience. All things considered, for me personally a drake-less flock is the way to go. I really don’t want to deal with all the hormonal agression and behavior that goes along with a drake, and I perfer not having my ducks all torn up and battered by a drake during mating season.