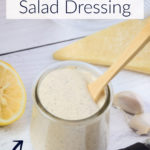 Inspired by a old newspaper clipping recipe for the house salad dressing from the Changing Scene restaurant in Rochester, this creamy garlic pepper parmesan salad dressing is super easy to make, and absolutely delicious!

Do you remember the Changing Scene restaurant? If you are from Rochester if you didn’t get a chance to dine there, you at least most likely heard stories about the unique downtown restaurant. The high-profile restaurant closed many years ago but remains part of our local culture, and skyline.

The Changing Scene opened in downtown Rochester in August 1977 as the first revolving restaurant in New York state. The restaurant featured the best views of the city from its 21st-floor perch on top of the First Federal Building.

Revolving restaurants are found all over the world, but they all feature an eating space that rests atop a broad circular revolving platform that operates as a large turntable. The restaurant its self doesn’t rotate, just the interior dining area. The building remains stationary and the diners are carried on the revolving floor. The revolving rate at The Changing Scene was once per hour which enabled diners to enjoy a panoramic view of Downtown Rochester without leaving their seats.

The Changing Scene was not without its struggles during its 11 years in operation, and at one point going through eight general managers in five years [mfn] Democrat & Chronicle, March 1, 2014, Whatever Happened to Changing Scene? [/mfn] There also seem to be conflicting memories of the actual quality of the food, some will say the food was amazing, while others say it was just “ok” at best.

The Changing Scene closed in 1987, and in 1990 and the rotating mechanism was dismantled [mfn] , so it is not likely that space will be going for a spin again anytime soon.

I found this recipe for The Changing Scene House Salad Dressing in an online forum, and I stashed away the image of the newspaper clipping in my restaurant recipe archive for a few years.

The listed ingredients for The Changing Scene’s House Salad Dressing are:

Place all ingredients into a food processor or blender and pulse until creamy and no chunks.

A lot of times when I am testing out “restaurant recipes” I have to wonder if ingredients were purposefully omitted, or if there was some error in printing, and that is very much the case with this recipe. The original recipe is quite basic, and not that impressive.

My recipe for Creamy Garlic Pepper Parmesan Salad Dressing, while inspired by Changing Scene’s salad dressing is a little different than the basic dressing from the newspaper clipping. The pepper, garlic and parmesan flavors a played up by the addition of dijon mustard, Worcestershire sauce, and a little bit of lemon juice. The mayonnaise-based dressing is then thinned to a perfectly pourable consistency with milk.

Make the salad dressing early in the day and cover and store in the refrigerator for 2 hours or overnight for the best flavor.

What are your memories of Changing Scene?

So glad we found this recipe. We are military fam stationed in South Australia and food options are nothing like America lol. We miss some good salad dressing. Lots of things you miss like simple things-pumpkin purée, sugar free pudding mix flavored drink mixes lol. This recipe was amazing.