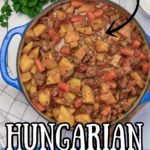 Hearty and satisfying Hungarian Goulash adapted from a vintage recipe from Trudy McNall is a filling and delicious winter meal.

Being the food geek that I am, I often alternate between searching for local recipes and looking for general vintage recipes. When I stumbled upon Trudy McNall and her collection of recipes I felt like I hit the jackpot! Not only were these vintage recipes, but they are from a well known and much loved local celebrity chef.

Who Was Trudy McNall?

Before Julia Child was a national household name Rochester had it’s own celebrity chef, Trudy McNall.

Gertrude “Trudy” McNall a Pennsylvania native, graduated from Pennsylvania State University in 1934 with a bachelor’s degree in home economics. She also studied at Fannie Farmer’s Cooking School in Boston.

She married Stephen McNall, a Henrietta farmer, in 1941, and aside from helping to work on the farm, she passed on her cooking knowledge and skills in 4-H Club classes, and wrote articles for Woman’s Home Companion and Better Living.
Mrs. McNall appeared twice on Ann Rogers’ WHAM-TV morning show in 1953. Impressed, the station management invited her to start the live, half hour Home Cooking. Mrs. McNall would not just deal with entrees, “but with how to assemble a total dinner, and what went with what,” Rogers said. So the show became “basic training in cooking” for many young people, women and men.

Trudy found great success with the long running Home Cooking segment. Women loved to tune in and learn to cook new dishes, and get inspiration from her weekly menus. Every week Trudy offered menus in collaboration with Star Markets, housewives could request the weekly menu and recipes by mailing a SASE (Self addressed Stamped Enevlope) into the station.

After the show went off the air in 1963, Mrs. McNall worked as a consultant for food-service businesses, and had a test kitchen at R.T. French’s in Rochester, she also made guest appearances on TV and radio.

Hungarian goulash is drastically different from America goulash, and more closely resembles beef stew that the beef pasta version for goulash. I loaded my goulash with potatoes and carrots for my husband who loves potatoes, but you could easily leave them out if you aren’t as big of a fan of potatoes as my husband. One of the key ingredients in Hungarian Goulash is Hungarian sweet paprika, which delivers sweet pepper flavor without being spicy, I found it to be a tad more pricey than regular paprika, but in recipes like Hungarian Goulash, stuffed peppers, and Hungarian chicken paprikash there really is no substitute.

I found a copy of Trudy’s Hungarian Goulash over at Trudy McNall’s Home Cooking, the site was created anonymously and seems to be a complete collection of McNall’s recipes, someone put a lot of time into perserving these recipes.

My recipe is very similiar to Mrs. McNalls, but I did tweak a few things to suit our preferences and modern ingredients. Instead of making beef broth with bouilon I used premade beef stock. Because stock is often made with aromatics and has a richer flavor than bouilon I skipped the Bouquet Garni. I also went with canned tomato products, because that is what I happened to have in my pantry, and while the recipe is written in a way that makes me think it is calling for fresh tomatoes, I feel at the time it would have been common for women to be using a mixture of homecanned tomatoes, fresh tomatoes or commercially canned tomatoes. I don’t think there is a wrong answer here. I opted to serve my hungarian goulash as is, but if I had made it without the potatoes, I would have definitely served it over hot buttered egg noodles.

I don’t personally remember Trudy McNall or her Home Cooking segment, but learning about her has been fun. I loved this recipe for Hungarian Goulash, and I am looking forward to trying more of her recipes.

Do you remember Trudy McNall? Did your mother collected her recipes?