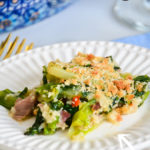 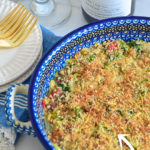 You know I love finding and recreating regional Upstate New York recipes. I’ve spent quite a bit of time searching old newspaper clippings, cookbooks and cooking forums for local recipes from restaurants, local chefs, and homecooked favorites. It quickly became clear to me that there are several variations of the same dish.

A few years ago I shared this recipe for Central New York’s Utica Greens, It is, without a doubt, one of the most crave-worthy recipes to be recreated in my kitchen. I debated for quite a while about sharing another Utica Green recipe, but once I made Janet Chanatry’s version I knew this recipe also needed to have a home here among my collection of Upstate New York comfort foods.

Since 1912, the Chanatry family has owned and operated Chanatry’s Hometown Market Grocery store. Located at 485 French Road in Utica, the family owned and operated store is deeply committed to its local community. The store offers a broad range of locally produced goods, and celebrates Utica’s local flavor with tomato pie, greens, pusties and chicken riggies.

This recipe comes from a weekly sales flyer, and since I found the clipping scattered around the internet in various places I am having a hard time finding a date to go with it.

But here is what I do know, Janet Chanatry is currently the secretary and treasurer of Chanatry’s Hometown Market, she is the widow of the late Bill Chanatry who was associated with the family business for his entire life, but took the helm upon retiring from General Electric in 1991. When Bill became President of Chanatry’s Hometown Markets he re-invented the store with improvements and upgrades to help the store compete with “Big Box” stores.

Aside from her duties and responsibilities as treasurer and secretary, Janet also supplied shoppers with menu inspiration and tried and true family recipes. You can frequently find Janet’s recipes in the printed weekly sales flyer. The featured recipe usually relates to a sale item. In my recipe clipping, you can see at one point Janet had a cookbook titled Janet’s Choice Recipe Book that was sold for $2.99, and I would absolutely love to get my hands on a copy!

Janet’s Utica greens are a little different than other greens recipes. This hearty recipe contains the usual ingredients of escarole, garlic, fried prosciutto, chicken broth, Percono-Romano cheese and bread crumbs, but the pepper choice is not the typical fresh or pickled hot cherry pepper. Chanatry’s Utica Greens recipe calls for fresh long hot Italian peppers, 2 in fact. I was able to get the long hot Italian peppers at Perinton Wegmans, but it took a couple of trips to find them, with the crazy food supply being what it is nowadays.

I’ve talked before about how I like to adjust the heat level of Utica Greens. Guys, I’m a wimp with acid reflux. I know Utica greens pack a spicy punch.

I did some research on long hot Italian peppers over at Pepperscale, and was encouraged when I read Long Hots are closer to bell pepper heat territory than that of a jalapeño. With a Scoville heat range of 100 to 1,000 SHU, long hots have very little heat , and are at least 3 times milder than a jalapeño. After I prepared my long hots, by deseeding and cutting them I tested out the heat level of my individual peppers, and touched one to my tongue.

I’m not saying Pepperscale lied to me, but these peppers were HOT. Ultimately, I ended up using half of a long hot pepper in my Utica greens, and loved the end result. Keep in mind the hotness of peppers can vary, even among the same variety from plant to plant. Test the heat level of your pepper and adjust the recipe to suit your preferences.

Utica is home to a very large Italian-American population who have made the area a destination for Italian-American comfort food. Many Upstate New Yorker’s recall their favorite version of Utica Greens back to Sunday suppers with grandma at the stove. Usually referred to as either “greens” or simply ‘scarole Utica greens are a beloved local variation of traditional Sicilian and Southern Italian sauteed greens.

The homestyle comfort food that was made with kitchen garden bounties and pantry staples, was eventually popularized by Joe Morelle in the late 1980s at the Chesterfield Restaurant in Utica, N.Y. In this interview with the NY Times, Joe Morelle shares how he saw a chef he had previously worked for preparing the greens, and how he tweaked the recipe and brought the traditional Italian dish to Chesterfield’s restaurant, where it is on the menu as greens Morelle.

Escarole is usually very sandy and gritty, and should be washed thoroughly and carefully. If you want to skip washing and cutting Wegmans sells cleaned and cut escarole in a 15-ounce bag, which is the perfect amount for this recipe.

Every chef has his or her own recipe and technique when it comes to preparing Utica Greens, but of all the recipes I have tried I have had the greatest success when blanching the greens in boiling water until they are softened and wilted. Escarole can have a mildly bitter taste, but blanching the greens before sauteing them with the rest of the ingredients helps purge some of their bitter aftertaste.

After you have blanched the escarole, the greens come together very quickly on the stove top, you simply saute the garlic and prosciutto over medium heat, being careful not to burn the garlic, this should only take a few minutes, then you add the peppers and cook for a couple of minutes, and finally the blanched greens, chicken stock, breadcrumbs, and cheese to the pan. If you’ve prepared your greens in an oven safe skillet you can top the greens with additional cheese and bread crumbs and place under the broiler for 4 to 6 minutes until golden brown. If not spread the greens in a casserole dish, top with bread crumbs and broil.

Escarole is usually very sandy and gritty, and should be washed thoroughly and carefully. If you want to skip washing and cutting Wegmans sells cleaned and cut escarole in a 15-ounce bag, which is the perfect amount for this recipe.

Properly stored, cooked green beans will last for 3 to 5 days in the refrigerator. To further extend the shelf life of cooked greens, freeze them; freeze in covered airtight containers or heavy-duty freezer bags, or wrap tightly with heavy-duty aluminum foil or freezer wrap.

I am always on the lookout for local recipes! If you have a recipe you are willing to share, shoot me an email, or leave it in the comments, you will be credited as the source of the recipe when I publish, and I will be eternally grateful.