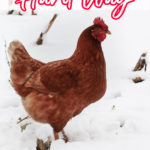 Since I am nearing the one year anniversary of getting back into chicken keeping after a long hiatus, I have been reflecting on my first year with my feathered friends. The chickens and ducks kept me busy, and got me outside when I otherwise would’ve been tempted to sit in the house in an attempt to wait out these unprecedented times.

But it hasn’t always been easy, there have been challenges, and things I wish I had done differently. I’ve gone through some trial and error with different kinds of bedding, feed and supplements. I bought straight run ducks, and ended up with 5 males. But all of these situations pale in comparison to my biggest regret about how I managed my backyard flock this past year.

I am not sharing this with you today because I particularly want to. I’m one of those types of people who prefers to learn from my mistakes and move on. If by sharing this I can prevent you from getting into the same mess I got into, I think it’ll be worth reliving my experience.

The most difficult aspect of raising backyard chickens is, without a doubt, keeping them safe from predators. If you keep chickens long enough, eventually you’ll have a run-in with a predator. Unfortunately, once you have one attack it’s only a matter of time before another attack. A hungry predator will keep returning until it has decimated your flock, leaving surviving flock members stressed and traumatized after each visit.

The Cost of Free Ranging

I have a solid chicken coop that sits on a concrete slab. The coop is secure, and offers my flock protection from the elements and nocturnal predators. While the chickens were safe and secure at night, during the day they were allowed to freely roam around the yard. I mistakenly assumed because our yard is typically a busy area of the farm, surrounded by fields that are tended to daily, and that the chickens were frequently in the company of the house dogs who also patrol the yard and fields, the flock had a certain level of protection.

Last summer while my flock was scratching around my backyard, I lost 3 birds to a predator. The same predator.

Free range chickens, even in your own backyard are ridiculously vulnerable to predation, way more so than chickens who are secured in their coop or run all day.

My neighbors also keep chickens, and unbeknownst to me, for years they had been dealing with a fox. The first summer they kept chickens, the fox wiped out their entire flock in only a matter of days. After that their replacement flock of chickens were permanently penned, only free ranging when the family was home and outdoors doing yard work, or enjoying their outdoor spaces. My neighbor told me the fox had become so brazen, they once came home after a day at the beach to find the fox on top of the coop trying to dig through the roof. The fox had gotten a taste of chicken and was determined to keep feeding on them.

It was only a matter of time before that fox found my flock across the road.

Midsummer I lost my first chicken. I had just returned from grocery shopping, and realized one of my girls was missing. It was like the chicken had vanished into thin air. There was no evidence of a predator attack.

Fox are cunning and stealthy hunters, who will pluck a whole bird from a flock and bring it back to their den, or other remote location to eat, leaving very little, if any sign they were ever there.

A week later I lost another chicken.

I wasn’t about to lose my entire flock to a persistent fox, so I decided to extend my chicken run. Keeping my chickens in a run, seemed like the only way to keep them safe.

While I was out in my yard pounding posts and installing fencing panels, the fox attempted a strike again. Literally yards away from me! This was the first time I laid eyes on the perpetrator. In the chaos of the moment with the ruckus of chickens clucking, running and flying in every direction, I yelled to my pit bull who was casually sniffing around in the hayfield on the other side of the yard “GET IT”.

Bella didn’t need to be told twice, she had spent her whole summer frustrated that the chickens aren’t for chasing, so she had quite a bit of pent up prey drive she needed to work out.

For the record I knew she couldn’t catch the fox, as fast as she is, she spends the majority of her day following me around, and sleeping on the couch. She lives a pretty soft life. But I thought if the fox had a good chase it may think twice before coming back. Once she took off, running full speed, tailing the much faster fox through the corn field, I did worry that there was a small chance the fox could end up cornered, but it turns out my dog doesn’t have the stamina or motivation to follow anything beyond our property line.

For the next several weeks, my dog LIVED to chase the fox. She got good at picking up it’s scent, and often spotted it stalking our yard in some tall overgrowth on the edge of the hay field, or in rows of corn. A couple of times a week I would notice my dog take off out of the yard like a rocket, chasing a fluffy white tipped red tail.

I became uneasy at just how much time this fox was spending in close proximity to my yard while I was out in it gardening, or tending to my chickens.

After a while things seemed to quiet down, I began letting my chickens free range again, but only when I was home. I thought maybe the fox had gotten sick of being chased away from a chicken buffet by a pit bull with a pent up prey drive. But for the second time that summer I was wrong.

On a warm summer evening while I was indoors preparing dinner, through the open windows I heard wings flapping, chickens in distress, and a general commotion going under my dining room window, when I looked out the window I was shocked to see the red fox with one of my leghorns in its mouth, literally on the sidewalk by my house. Once more I released the dog on the fox, and went out to my yard to round up the terrified flock and assess the damage. Another chicken was gone. Although she did show up a couple of days later, her tail was ripped clean off, but she survived, and I was done.

I called a friend to come take care of the fox. I told him to use any means necessary to get this thing out of my life. I needed to relieve the pressure and stress of the fox attacks to construct the chicken run I really wanted, and needed.

My friend Nick is a professional, removing nuisance animals is actually what he does, and he does it very well. But this fox was intelligent, it had spent a lot of time learning our farm’s rhythms and routines, it was leary of the nonlethal foot traps. It also seemed to know when we set a trap, and played a chicken in distress call near the coop after dark while lying in wait with guns, it would circle just out of range, seemingly knowing something wasn’t right.

After about two weeks, we finally got the fox in a foot trap. The fox was relocated to another rural area, far away from our farm. I have no doubts that the fox is doing well, it was a skillful hunter, and highly intelligent. I just hope there are no chickens in the area.

Life After the Attacks

Following the capture of the fox who was terrorizing the flock and making my life miserable I was initially relieved, but my peace of mind didn’t last long. It is only a matter of time before another fox moves into the area to take over the now open territory. My husband and I have been talking about dedicating a small section of our yard as a chicken pasture, complete with sturdy fencing.

The Most Important Chicken Keeping Lesson I Learned the Hard Way

Predators like foxes, coyotes, and even small carnivores like weasels are incredibly smart animals that shouldn’t be underestimated, I learned that the hard way. The attacks were incredibly stressful for not only my flock, but also myself.

When raising chickens, there is always a high risk of a predator attack regardless of where you live. If given an opportunity, a wide variety of predators will make a meal out of backyard feathered friends. But, if you make an effort to provide adequate housing and fencing where they can be secured, before you have a predator problem you’ll save yourself a lot of headache, and a few birds.

Which predator animals are a problem in your area? How do you protect your chickens from attacks? Let me know in the comments below!