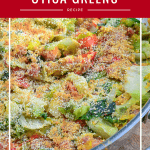 The History of Utica Greens

In Central New York, about 60 miles east of Syracuse lies the smaller city, Utica. The city of Utica has a diverse immigrant population, and the blending of the many unique cultures and traditions have resulted into some seriously amazing regional cuisines, which includes tomato pie, chicken riggies, and of course, Utica Greens.

Utica Greens were not originally chef-prepared restaurant fare, it was the creation of frugal home cooks, making do with what they had on hand. The Italian American dish, features garden-grown escarole, and pantry staples such as pickled cherry peppers, olive oil, chicken stock, breadcrumbs, and cheese.

While the dish was well known and loved home-cooked comfort food, it was popularized by Joe Morelle. In the late 1980s when Joe put them on his menu at the Chesterfield Restaurant in Utica.

In the early 1980’s Joe Morelle worked as a chef at Grimaldi’s Restaurant, a favorite local dining spot that has since closed. During Joe’s time at Grimaldi’s greens were served as a seasonal special. Joe watched as the head chef made them, and begun working on his own version.

In 1988 when Joe started at Chesterfield’s, he put his greens on the menu as a regular appetizer. Joe’s version of Greens was put on the menu as Greens Morelle and were an immediate hit

In 2007 Rachel Ray featured a mash-up of chicken riggies and Utica greens called Chicken Riggies and ‘Scarole with Soul. The feature on her Food Network show introduced two of Utica’s most beloved recipes to a national audience, further popularizing the dish.

If you have never had escarole before, it looks a lot like lettuce but is actually more closely related to endive. The flavor of escarole is somewhat similar to that of a radish. Escarole is usually very sandy and gritty, and should be washed thoroughly and carefully.  If you want to skip washing and cutting Wegmans sells cleaned and cut escarole in a 15-ounce bag, which is the perfect amount for this recipe.

Utica Greens are just one of those dishes you can not go wrong with, I am pretty sure the recipe is foolproof. There are 4 easy steps:

Escarole can have a tendency to be bitter, but blanching the greens before sauteing helps to mellow the flavor and results in a tender leaf that is not bitter at all.

If you want less heat in the finished dish, reduce the amount of cherry peppers, but this dish is typically pretty spicey.

There is no wrong way to serve this dish. Utica greens can be a side dish, main dish or appetizer. I personally love making a meal of Utica greens. I think they are best served with a loaf of hot crusty Italian bread and a glass of Riesling.

I'm relatively new to enjoying Utica Greens and have had them in a few restaurants; none of which was as good as "my" home-made Utica Greens so thanks so much for sharing this recipe and for all the helpful directions in preparing it. The only downside was that it took me a helluva a lot longer than 35 minutes to prepare, but that's probably just me as I can get pretty anal about chopping and such. Oh, and another problem. They were so-o-o good my husband and I both ate more than we should have so they didn't quite serve four as a main dish. ;-) Thanks again!

I am from Central New York and know good Utica greens when I taste it. This was delicious! I made it exactly as written and it was as good as in any restaurant.

OMG DON”T USE SWISS CHARD. Jen you just put a knife threw the hearts of Italian Uticans. You won’t get the robust smooth taste with using stringy swiss chard.

Point taken! I am not going to argue with an Italian Utican about Utica greens :-)