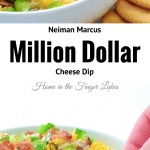 Neiman Marcus Cheese Dip is always one of the most popular items on the appetizer table at parties. Made with only 5 ingredients, this dip is a breeze to mix up but tastes like a million dollars.

I love a good appetizer,  but I have a special fondness for cheesy, salty apps, like Olive Cheese Bread.  Neiman Marcus Cheese dip includes all of my favorite crave-worthy flavors; it is cheesy, salty, and bacon-y, but is even easier to make, and the result is completely addicting.  This dip is always a huge hit during a football game or holiday party. Bring this dip to a gathering and you are guaranteed to bring home an empty bowl. 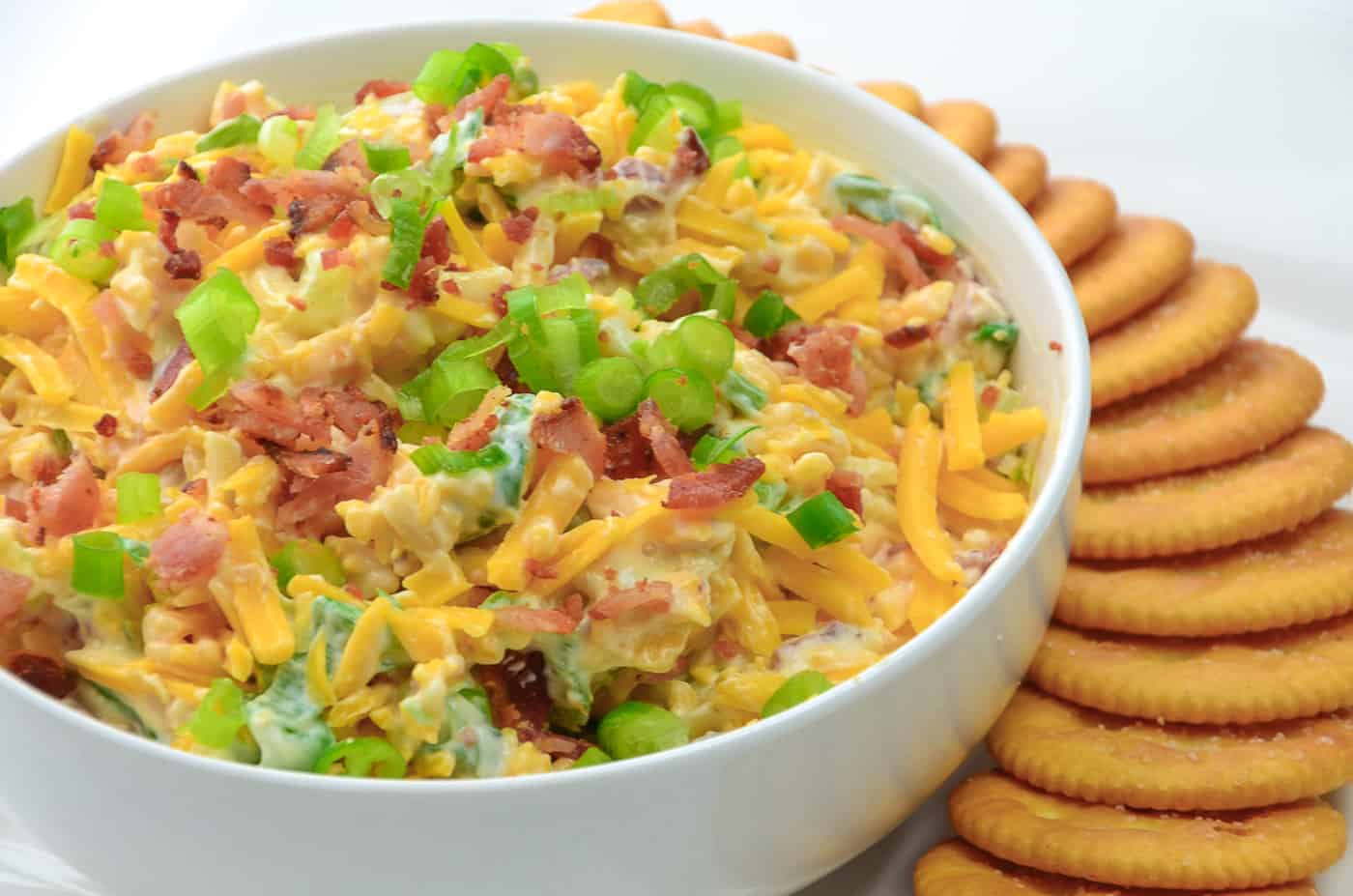 While searching the internet for the origins of this dip (more on that later) I found that it seems that this dip has a few monikers. I know it as Neiman Marcus Cheese Dip, but I have also seen the same exact recipe called Million Dollar Dip floating around Pinterest.

When I originally published this recipe I said I was not entirely sure how the Neiman Marcus dip got its name. It happened to be Halloween when I published this post, and I was busy preparing for the night’s festivities, but I did share a link to this recipe on Twitter, and to my surprise Neiman Marcus actually replied,  so naturally I had to ask about the cheese dip’s history, and if it had been served at the flagship Neiman Marcus store’s restaurant in Dallas Texas.  Neiman Marcus graciously researched the Cheese Dip recipe for me, and it turns out this Cheese Dip was created by a native Upstate New York Chef,  was published in a cookbook that miffed Julia Child, and was indeed served in the Zodiac Room.

Helen Corbitt was born on January 25, 1906, in upstate New York. She grew up in a household where good food was highly valued and generously shared. After her graduation from Skidmore College in Saratoga Springs, New York, with a degree in home economics,  she had planned on attending medical school, but those dreams were derailed by the Great Depression. She instead, took a job as a therapeutic dietitian at Presbyterian Hospital in Newark, New Jersey, then went on to Cornell Medical Center in New York, where she persuaded doctors that sick people would respond more favorably to food if it was properly seasoned and attractively served. Helen would move on to become an instructor and manage the tearoom at the University of Texas.  She went on to work in country clubs, department stores and even had her own catering business for a period of time while in Texas.

In 1955, after many years of persuasion from Stanley Marcus, Helen Corbitt joined Neiman Marcus as Director of Food Services. At Neiman-Marcus Corbitt’s flair to create food that was visually appealing using only the finest and freshest ingredients made the Zodiac Room at Neiman-Marcus a culinary destination, and one of the most sought-after reservations in Texas .

During her years as the Director of Food Services at Neiman Marcus Helen Corbitt wrote many cookbooks sharing her experiences and recipes from the Zodiac Room.  Stanley Marcus secured Helen’s publisher Houghton Mifflin for her first cookbook: Helen Corbitt’s Cookbook: by the Director of Neiman-Marcus Restaurants, and it was decided that her book would be directed to the home cook from the start and the recipes would be simple for the home cook to master. At the same time, Julia Child was also under contract with Houghton Mifflin for her Mastering the Art of French Cuisine. Houghton Mifflin ultimately turned down Julia’s book because of its overly complicated recipes, thinking no one would be interested. Julia ultimately got her book published by Alfred Knopf in ’61.  Julia wasn’t very happy with this decision saying that Houghton Mifflin was “more interested in a chef in Texas who was creating jello recipes”. 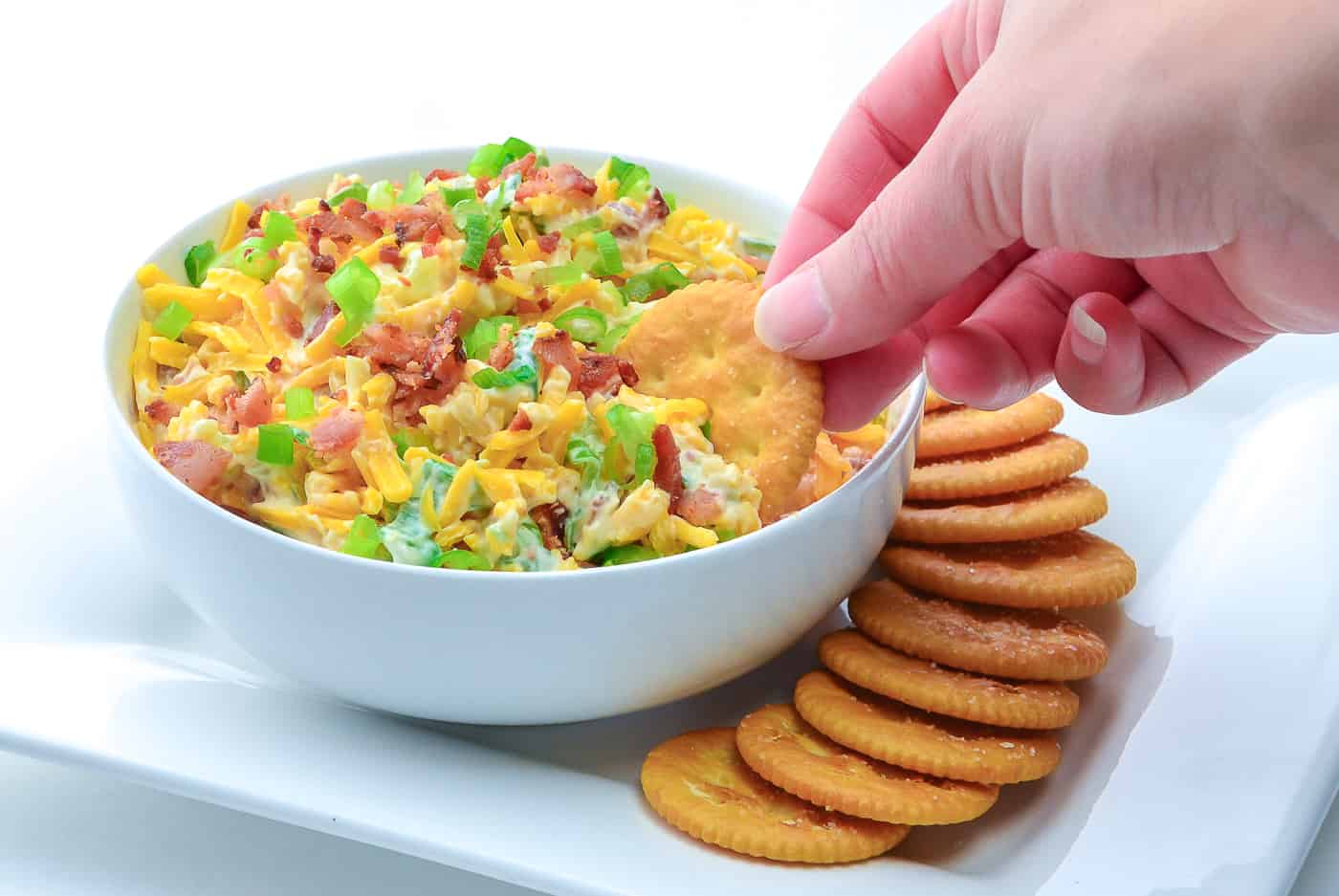 You can find the original recipe for Neiman-Marcus Cheese Dip in Helen Corbitt’s Cookbook: by the Director of Neiman-Marcus Restaurants, simply named Almond-Bacon-Cheese Spread, the recipe has stood the test of time and is identical to this one (mine has been increased to feed a crowd at a gathering).

For my version, I use real bacon, 5-6 slices is all it takes.  We buy a whole freezer pig every fall, so I usually have bacon on hand. But, if you don’t or would just like to skip the mess of frying up bacon, you can easily substitute a 3 oz. package of real bacon pieces, just make sure not to use bacon bits!

If you prefer not to cook bacon you can substitute a 3-ounce jar real bacon pieces (not bacon bits).

I just made this. It's so good. Kids loved it. We used tortilla chips to dip into it. We couldn't wait to chill it and had to taste it immediately. It was amazing. It's chilling now.

What a fun party dip!

Thank you, it is great for a party!

Sam | Ahead of Thyme

This cheese dip looks so good and so easy!! Thanks for sharing!

Thank you! It is delicious

Thanks for the recipe. There is also a recipe NM cookies floating around... I wonder if that was Helen's, too?

That is a good question! I would love to find out, she was a very interesting lady.

Wow, so easy to make and so delicious looking dip! Bookmarking it!

Thank you! It is so easy and always a hit at parties :-)