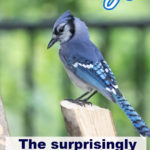 It is highly unlikely a Blue Jay would make an attack attempt at a full grown chicken, but they have been known to hunt and kill chicks, and raid nests for eggs, and harrass bakyard flocks.

On a warm Fall day last year while my chickens were peacefully hanging out under their favorite lilac bush, I was startled to hear the distinct sound of a chicken in distress through my open windows. If you aren’t familiar with chicken in distress sounds, chickens will vocally alert the rest of the flock if danger is afoot. Usually the rooster is responsible for alerting the flock, but if you don’t keep a rooster the hen at the top of the pecking order will fill the role of flock warning system. My hens predator call sounds like a panicked egg song, and depending on the bird it can be very high, very loud, and very shrill.

When I ran out to the yard to see what the problem was I noticed a clicking noise coming from the taller branches of the lilac bush. As I got closer I realized the clicking was coming from a large male Blue Jay, who seemed completely unbothered by my presence. I shooed the bird away, and did a quick head count of my hens, and checked for injuries. All my girls were accounted for, and not a feather out of place.

But I was unsettled by the Blue Jays intimidation of my nearly full grown flock, and I spent some time researching the distinct bright blue bird that had ruffled my flock’s feathers.

What’s the Deal With Blue Jays?

My mother who is an avid bird watcher, and maintains several bird feeders around her yard, filled me in on blue jays. Long story short, Blue Jays are jerks.

At bird feeders blue jays are known to be bullies, who aren’t afraid to chase other birds away from feeders. They are large vocal birds, and will cause quite a bit of noise and disruption to intimidate the song birds that the feeders were initially set out for from coming too close.

Blue jays can also be extremely territorial over both their food and nesting areas, and are not afraid to attack other birds. They have also been known to dive bomb dogs, cats, and humans who get too close.

Jays are protected by the federal Migratory Bird Treaty Act, so you really can’t do much to harass or remove them from your yard. But there are a few things you can do to deter Jays from taking up permanent residence in your yard, we’ll cover over that a little later!

Are Blue Jays a Threat To Chickens?

Blue Jays are omnivores who are happiest in wooded settings, but they can be found in open rural settings as well. Jays eat a lot of nuts, fruits, and seeds, but they will also hunt and eat grasshoppers, beetles, and caterpillars, and hunt other small birds.

When blue jays do hunt, they are aggressive and will raid other birds’ nests, steal eggs, and kill young birds. They will hunt more than they can eat, and will hold prey in its feet while pecking it open. Blue Jays will sometimes pick at dead or dying adult birds, but it is highly unlikely a Jay would make an attack attempt at a full grown chicken.

At the time when the Blue Jay was harassing my flock I had a hen who’d just started laying, and her preferred nesting spot was under the lilac bush. I think the jay had found a few eggs under the bush, and was more interested in finding eggs, than attempting an attack on my birds. Whatever his motives were, I only saw him a couple more times around my yard before he moved on.

Young chicks are most at risk of an attack from a Blue Jay. While I was researching Jay attacks on chicken flocks I noticed an old thread on the Backyard Chickens forum, confirming that Jays have been known to hunt and kill chicks. Usually the attacks happen during warm spring days, when the chicken keeper has moved the chicks out of the brooder and into an outdoor pen, so the chicks can enjoy fresh air, sunshine and dirt to scratch around in.

To protect young chicks from Blue Jay, or any other bird or prey attacks make sure their outdoor run or pen has a secure top. If your chicks are in a temporary pen to enjoy warm spring air outside of the brooder, a chicken wire top to cover the area still provides your chickens an open air area, but stops any air-bound predators swooping down and attacking your flock.

How to Deter Blue Jays From Becoming Backyard Flock Nuisances?

If you have a Blue Jay who is trying to bully your flock, it is important to remember, Blue Jays, like hawks are federally protected. Do not hunt or trap Blue Jays, Jays are protected by the Federal Migratory Bird Treaty Act. What you can do is try to make your backyard unattractive to Jays, by placing visual repellants around your yard.

Hang Your Old CDs To Catch and Reflect Sunlight

Hanging old CDs (compact disks) from strings on tree branches is often used to deter hawks from an area, but it also works with blue jays. When the CDs spin in the breeze and reflect light the flickering and glittering light confuses or scares birds and they avoid the area. If you don’t have any old CDs laying around you can purchase Ornamental Spiral Reflective Spinners.

Place a Fake Owl in Your Yard

Blue Jays may be jerks, but they know they can just as easily be the hunter or the hunted. Blue Jays will avoid an area they feel threatened in and a large plastic owl may be enough to make a Jay think twice about hanging around too long. Jays belong to the same family as crows and are incredibly smart, it will probably not take them long to figure out the owl is fake, and doesn’t actually pose a real threat, but it will likely provide a short term solution.

If a fake predator like a plastic owl doesn’t help keep blue jays out of your yard, consider going with the real deal. A house cat isn’t likely to attack adult chickens, in fact an adult chicken would probably put up a good fight in a scrap with a house cat. Even well fed Domestic house cats will spend plenty of time each day hunting, and birds are a favorite prey animal for felines to stalk. Even if your cat never catches a Jay it is likely just having one in the area will deter a Blue Jay from hanging around too much.

Place Wind Chimes Around Your Yard

Another temporary option for deterring Blue Jays from your yard is wind chimes. Any new, unusual or unexpected noises will work to keep birds away, but as soon as they get used to the noise, they’ll likely return.

Blue Jays are surprisingly aggressive and brazen bullies. I was shocked to see how the Jay was behaving in my lilac bush last fall. I think as chicken keepers we hear a lot about foxes, hawks, and weasels but we should also being aware of the threat of a Jay attack on a young flock, or keep an eye out for bullying and intimidation from a Jay to full grown chickens, that can lead to flock stress.

Do you have any experiences with Blue Jays with your chicken flock?

Before I reached your fourth paragraph, I thought to myself Blue Jays are aggressive. I grew up with them in our yard, and we're just starting to get the prettier birds here in the neighbourhood. They are always dive bombing other birds and each other. I had no idea they'd be that way with chickens though.