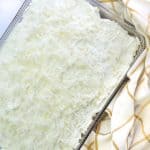 The original idea behind the poke cake was simple, elevate a plain white cake by drenching it in Jell-o, adding flavor, color and moisture to a sheet cake. The coconut version of poke cakes happens to be my favorite. My all-time favorite guilty pleasure food is a frozen Pepperidge farm coconut cake, and I think this poke cake is a pretty close copycat recipe for my favorite frozen square cake!

Making a Coconut Cream Poke Cake is quick and easy. Sure, you could make the cake from scratch, but poke cakes are just kind of a fuss-free cake.  Even though I generally like to bake from scratch, I make an exception for this retro cake. I have had great results with poke cakes when they are made with “natural-ingredient” cake mixes such as  Pillsbury Purely Simple, or Miss Jones Baking Organic Cake Mix, because these types of cake mixes tend to create a denser crumb, I personally think these mixes carry the addition of a heavier filling like coconut cream better.

Poke the cake with holes all over (hence the name “poke cake”). I use the handle end of a wooden spoon.  But you could use a straw, a chop stick, even a large serving fork, whatever you have handy. Just get some holes in that cake.

Making homemade stabilized whipped topping may seem like an unnecessary step, but it is SO EASY and the time it takes is completely worth it. I think we all have our own tolerance level for commercially prepared products, I will occasionally break out a box cake mix, but generally avoid the frozen tubs of whipped topping, The frozen stuff is just is not the same as real homemade whipped cream.  Making the whipped topping is worth the extra step, I promise.

While we are on the topic of the whipped cream, I will admit the stabilizing the whipped topping is optional. Whipped cream doesn’t keep well if made in advance, and will likely start weeping and losing its shape pretty quickly. If I am making anything that has a whipped cream frosting to bring to a gathering I always use stabilized whipped cream, it just looks nicer longer.

Stabilizing whipped cream is remarkably similar to stabilizing the sponge centers of sponge candy, all you need is unflavored gelatin. If you have never worked with unflavored gelatin before there are a few things to know, but don’t worry it is super easy! Before adding gelatin to a recipe, it must be softened and then melted, a process known as “blooming”, and involves 2 super easy steps:

Once the gelatin has been bloomed and melted, you can add it to your cream, for whipped cream to looks great on a cake or pie!

If you don't feel like making stabilized whipped cream, use an 8-oz container of frozen whipped topping to frost the cake.

Recipe Adapted From the Country Cook

Do you like poke cakes? There are a ton of variations, which flavor combinations are your favorites?

I never comment online but I couldn't help myself. I agree with you on the Pepperidge Farm coconut cake. I used to like it just a little frozen. But beyond that, I come from a family of 10 brothers and sisters. The big birthday thing was that my mother would make a poke cake and the birthday kid could pick the kind of jello to be poured over the top. Until I read your article I did not remember that this is what the cake was called. Thanks for the laugh and memories!