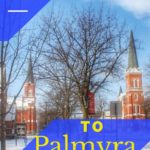 Palmyra is inviting Erin and Ben Napier of the HGTV series Hometown to come work their magic, and spruce up the ENTIRE town!!

A group made up of lifelong residents, historians and town officials want to get the HGTV pros to come visit Palmyra or the new “Home Town Take Over” set to air in 2021 on HGTV.

The all-new concept series Home Town Takeover, is a six-episode special event slated to air on HGTV in 2021 . The series is a spin off of the popular Hometown Renovation show, which follows Erin and Ben Napier as they renovate turn-of-the-century homes and revitalize historic properties. HGTV is accepting applications from small historic towns to be featured through February 7th. While the deadline to submit an application is perilously close, a small but dedicated team is finalizing the application in hopes HGTV picks Palmyra for the town renovation and restoration project.

To be eligible for restoration, a town needs to meet three requirements: The town has to have a population of less than 40,000 residents. It must have homes and buildings with great architecture ready to be revealed. And it has to have a downtown area (like a classic Main Street) that could use some TLC.

Palmyra, A Small Town With a Big History

To be considered for the starring role in “Home Town Takeover” the group heading up Palmyra’s application are providing the history of their town, told by the people who live there. Resident and village historian Bonnie Hays shared Palmyra’s history and historical sites during a 5 minute long highlight video. The video is hosted by Jennifer Habecker, Palmyra resident and Realtor, and features Bill and Irene Unterborn, Palmyra residents and owners of Liberty House Bed and Breakfast. The video was filmed and produced by Kyle Hurley, a Pal-Mac Graduate currently enrolled at SUNY Oswego, studying Marketing and Applied Math Economics.

The town of Palmyra was founded in 1789, and became an important hub along the Erie Canal around 1825, and was a station for the Underground Railroad by the late 1850s, and by 1900 had become a thriving industrial center.

The village is the site of the first publication of the Book of Mormon, and also is thought to be the only town in the country that has an intersection with a church at each corner of the intersection facing each other; each of a different faith denomination.

During the video tour of Palmyra the group visited some of the village’s local gems and historical sites:

Phelps General Store and Home, where visitors can step back to 1800’s when this general store served early “canawlers.” Proprietor William Phelps completed renovations to the store by 1875, only to be left untouched by his son Julius, who locked the doors in 1940, leaving the store frozen in time. This store is still stocked with the original necessities and provisions used for canal travel. This is a one of a kind building with original, authentic items that remained in the store after it closed in 1940 and furnishings from 1868-1976.

The Palmyra Historical Museum a 23-room old restaurant and tavern built in 1826 and added to in 1898. The large building served as a boarding house and hotel from 1826 until the 1950’s. Today it is home to Historic Palmyra, and the town’s museum. Each room contains a themed collection, and the collections represent the community’s history from its founding in 1789 to today.

The Erie Canal Depot is an 1830 building that offered rest, boarding and ticket sales for canal travelers, and their mules! Canawlers would stop to buy their tickets to travel the canal and could house tired mules in the basement, or trade out a tired pair of mules for rested animals. A mule stall is still visible, complete with a lifelike mule who has taken up residence in the basement for demonstrative purposes. You can also find two extremely detailed dioramas of Lock 60’s double lock system from the enlarged Erie Canal in 1848, and the Aldrich Change Bridge from 1858. Replica captain’s quarters give you a glimpse of a Canal Captain’s life.

Book Of Mormon Publication Site on Main Street, the place where the first copies of the Book of Mormon were printed and bound in 1829 and 1830. It is also known as the Grandin Building, after Egbert B. Grandin, who owned and operated a print shop in the building. Today this historic site is operated by the Church of Latter-Day Saints, and is open to the public year-round. It features restorations of the original bookstore, printer’s office, printing press, and bindery.

The Fires that Changed the Face of Main Street

Palmyra has weathered its share of fires on Main street, each one leaving a gaping hole in its block, and drastically changing the character of Main Street.

In 1906, a major fire seriously damaged a block of buildings on the south side of Main Street. Before the fire was brought under control the loss was placed at nearly $8,000.00. Among those burned out were offices of the “Wayne County Journal,” a pool hall and a veterinarian’s office.

In 1949, while cleaning a clock with gasoline, an explosion and resulting fire caused the death of Maynard G. Fassett, the son or Mr. and Mrs. R. D. Fassett, owners of the jewelry store in which the clock was being cleaned. 5 area Fire companies responded and limited the fire to one block on the West corner of Main and Market Street. The absence of the third story on the current Brick House antique store is very noticable today.

On May 3, 2013, a fire destroyed three historic Main Street buildings dating to the village’s Erie Canal era, and water from the firefighting efforts damaged a fourth. The buildings received such extensive damage they were no longer structurally sound and were condemned on May 7th, 2013. The buildings housed flea markets, office space and the flagship Mark’s Pizzeria, the birthplace of the local popular pizza chain, opened in 1982 by Mark Crane. The upper floors of the buildings were divided into apartment rental units.

The buildings affected by the fire had previously survived proposed demolition during the urban renewal era of the 1960s, and the fire was a devastating blow to the village. Mark Crane purchased all condemned buildings, demolished them and rebuilt a much larger Mark’s Pizzeria, along with a public outdoor eating space.

While Crane’s generous efforts to clean up the fire-damaged section of the village and rebuild the pizza shop were greatly appreciated by the town and village, the loss of a large section of Palmyra’s original Main Street was without a doubt a tragedy.

Out of the ashes of the collective fires, arose a community dedicated to preserving Palmyra’s historic past with a focus on rehabilitating historic buildings and districts, promoting heritage tourism, preserving community landmarks, and restoring downtown areas. Residents went so far as to file a lawsuit in the 1960’s seeking to block the major transformation of the village during a period of interest in urban development. The proposed development would have demolished all the historic blocks on Main Street for the construction of strip malls fronted with parking lots and retail chain stores.

Ben and Erin’s renovations on the show Home Town preserve and celebrate a home’s history, while adding modern and affordable updates. Palmyra is a fitting site for Home Town Take Over, as it is without a doubt a town where you can explore the past, and enjoy the present.

A note of recognition:

Palmyra is my hometown and would love to see what they do on the show. So many memories. I was a Realtor there for many years, we owned and operated The Gables Nursing Home and my family was involved in a variety of businesses.

It really is! My fingers are crossed, this is an amazing opportunity