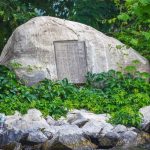 Squaw Island is an 11,000-year-old island located at the north end of Canandaigua Lake. It is known to be New York State’s smallest Fish and Wildlife Management Area and one of the two known islands in the eleven Finger Lakes.  Seneca woman and children sought refuge on the Island during the 1779 Sullivan Expeditions, and it is one of the few places on earth where ‘water biscuits’ form. 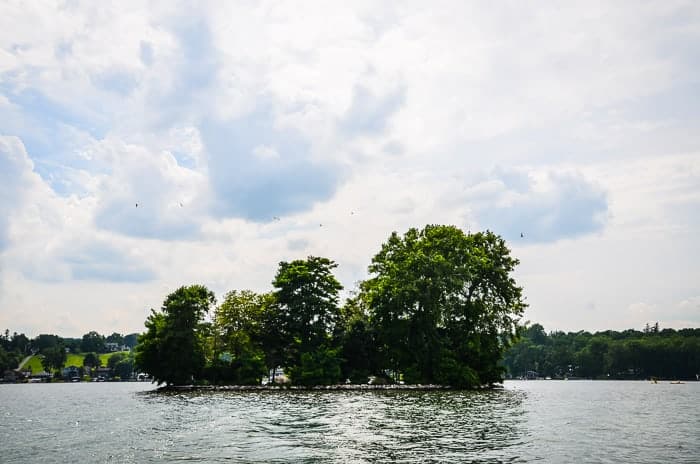 Before I begin I would like to address the term ‘Squaw’, it is considered a derogatory name in Native American culture,  it speaks to a time of prejudice, and is also used in references to white conquerors’ assault against Native American women. But that is the actual name of this Island in Canandaigua Lake according to the According to the Department of NYS Conservation website. The Island seems to have cycles of borderline neglect, that is until someone rallies for preservation, and even those efforts are generally short lived.  Because the Island generally sits without purpose or plan makes the fact that this Island is still known by a culturally insensitive name is not all the surprising.

Squaw Island is thought to be about 11,000-years-old  and is located at the north end of  Canandaigua Lake. It is known to be New York State’s smallest Fish and Wildlife Management Area and one of the two known islands in the eleven Finger Lakes. 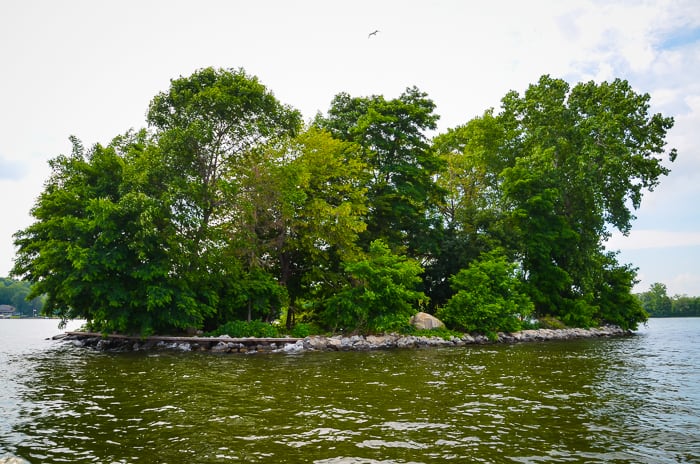 This little Island has quite the interesting history.

Local legend has it that in the 1700s local Seneca’s hid their women and children on the once much larger island during General John Sullivan’s march through Western New York to protect them from marauding federal troops during the Sullivan Expedition against the Six Nations in 1779. Quick history refresher: The Sullivan Expedition was a systematic military campaign against the Iroquois Six Nations during the American Revolutionary War.

Arrowheads and other artifacts have been found on the island, and while the Seneca people didn’t live on the island, it is believed that the island was also used for hunting and fishing. 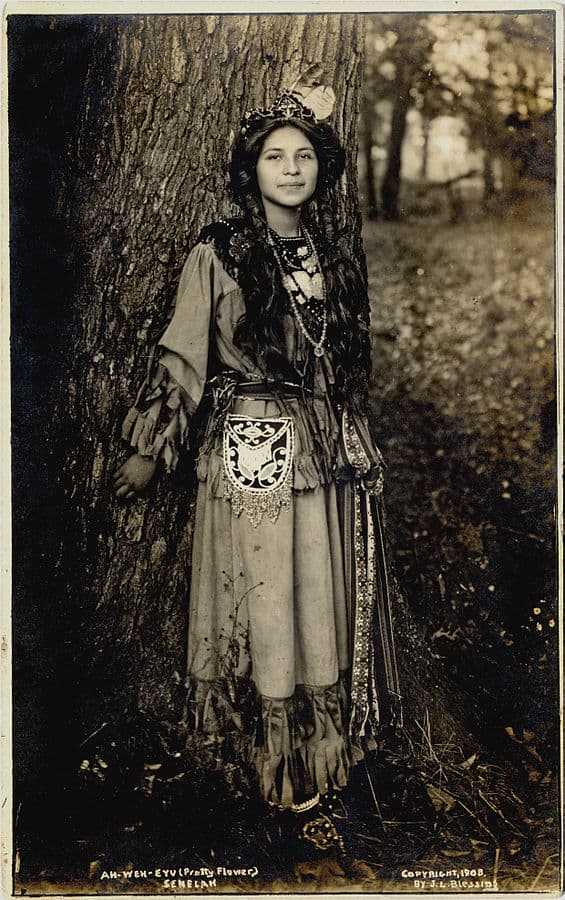 The island is also home to geological rarities called “oncolites” — also known locally as “water biscuits” — which are round, crumbly sediments formed by calcium and lime solidifying around small pieces of algae, twigs, pebbles, and sand.  The result of the formed sediments is feathery light rocks that are hard in the water but crumble if allowed to dry out. Sorry friends, I was unable to find any pictures of actual water biscuits, if you have one we would love to see it!

The island is one of the unique and few places on earth where these water biscuits form. Mary Thompson, who lived in Sonnenberg Gardens placed a boulder with a plaque on the island in 1919 commemorating the scientific significance of the Island. 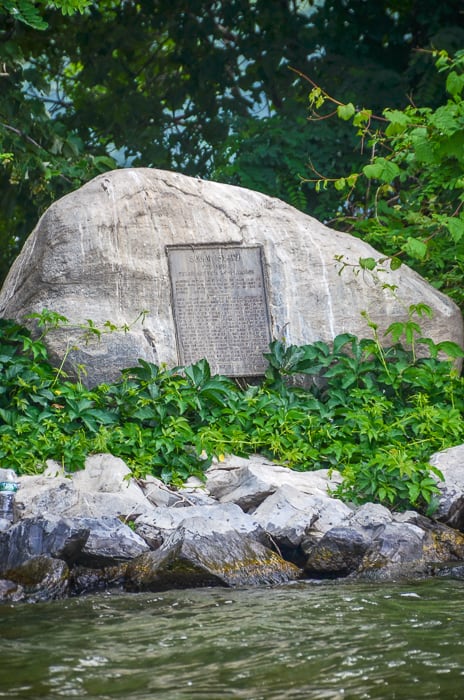 The Island made for fun family excursions, at a time there were picnic benches and winding trails to explore on the Island. Sadly, entry onto the Island now is nearly impossible.  Sea Gulls have overtaken the Island, the Island has defaulted to the breeding and nesting grounds to these nuisance seabirds. The Island is covered in bird guano, and if you encroach too closely you will stir up an angry flock of birds who will fiercely protect their nests.

Gulls are classified as migratory species and thus are protected by federal and state laws. In the United States, the nesting and breeding grounds of migratory species are also protected, which seems to be one of the reasons preservation of this small Island is so complicated. 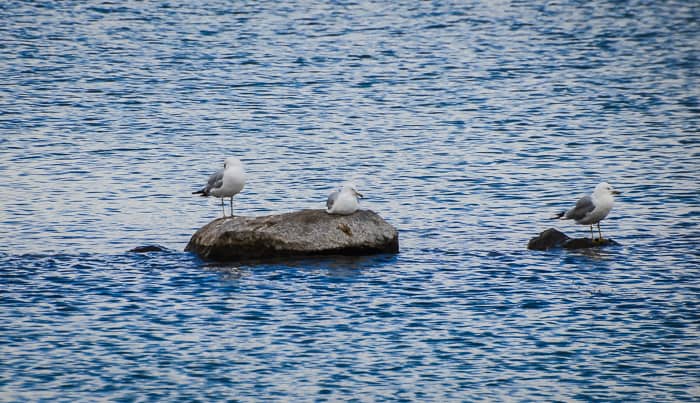 People are technically allowed on the island, but because of its combination status as a significant historical and scientific landmark and a breeding and nesting habitat for migratory birds, visiting is not encouraged.  Even when we floated by on the boat we stirred up and an angry flock of gulls and the stink of bird waste was noticeable, combined with the overgrowth this is not an island you would want to picnic on, let alone try to step foot on.  But if you happen to be out on a boat or in the area, it is an interesting location with an equally interesting history lesson to pass on to the kids or out-of-town guests.

According to the Department of NYS Conservation, Squaw Island is open for recreation year round. Although, a visit to the Island would hardly be enjoyable.

I am really curious, Do you have any memories of visiting Squaw Island? What are your thoughts on the preservation of the Island?

I used to visit the island as a boy, swam and fished nearby. We walked out almost all the way in the summer months,and it was easily reached from shore. In the winter months, we skated out, always looking to avoid the air bubble areas, which could mean a dunking if you weren't careful! For a while in the 40's & early 50's, there was a duck blind on the island's south side. One time as teenagers when a bunch of us were partying out there, a friend fell out of a tree at water's edge and broke his arm - he still lives in Canandaigua so I won't embarrass him by mentioning his name, true story though! There was no gull problem back in those days, but there was a lot of poison ivy on the island, so you had to be careful if you walked around on it. It is much smaller now too. I have many good memories of the place, and my boyhood days enjoying it with my friends. John Winthrop, Cayucos CA, (805) 995-2338.

Hello, Just saw your article while I was looking for images of the island to paint. As a child and teenager, I lived on the west side of the lake very close to Squaw/Skenoh Island. We used to row over,(one time I swam)to take picnics and walk around on the island and play at being Native Americans. The north end of the lake at that time was undeveloped and a wonderful swampy area. A flat bottomed rowboat could slip among the reeds and cattails easily. Like a wildlife refuge, water birds, turtles, tadpoles, snakes and water bugs and spiders were all within arms reach. It was quiet and peaceful in the swamp; there was no boat launch at that time, and motor boat traffic was les rampant, especially during the week. I knew of only one or two pesky personal watercraft in the area, annoying as buzzing flies disturbing the peace. Water biscuits that we called sea biscuits were plentiful and always a target of our underwater dives. Watching the green bubbles of algae (?) float by us in the late summer was also an interesting sight. There were reeds that grew from the swamp all the way over to the island and beyond. In late summer one could walk out into the surrounding waters nearly to the swamp, because they grew very, very shallow in late August and September. We knew the shallow spots, so our propellor never was harmed. It was a different time and I miss it.

Hi Jen I realize your post was written in 2017 and I must say you did a good job of summarizing the history of the island.

As a child I used to walk on the ice to the island in the winter and swim to it in the summer. When Mary Thompson had the boulder placed on the island in 1919 it was 4 ares in size. Currently it is a 1/4 acre.

The island is shrinking because Sucker Brook is dredged to allow boat access. The brook carries sediment into the North end of the lake and creates sand bars. The sand bars prevent the boats from accessing the channel so they are dredged. The dredging allows stronger currents to continue to erode the island.

It is now the year 2020 and the City and Town are now addressing the name of the island. A letter from a Seneca's suggest renaming it to Skenoh Island - meaning peace.

Hi Jen, I enjoyed this post. I visited Squaw Island and picked up trash last summer. Probably got poison ivy or some other rash there too, even though I tried to be careful to avoid stepping on vines.

I have a blog at http://www.fallbrookcove.com and some mention Squaw Island. I’ll bookmark your page and try to get some photos of “water biscuits” to you when the water warms up. My daughter is a geologist and she knows how to find these.