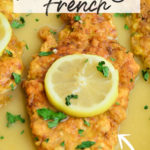 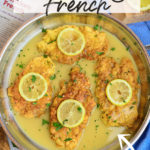 I’ve said it before, and I’ll say it again, Upstate New York has some of the best regional foods around! The Upstate area boosts an array of unique foods that are reflective of the culture and community from where it originates.

You probably already know here at Home in the Finger Lakes we love our local dishes, and I’ve been recreating as many of Upstate New York’s Regional dishes as possible in my home kitchen to share with you. We’ve cooked up comfort food classics and locally loved restaurant creations like half-moon cookies, garbage plate meat sauce, Utica greens, salt potatoes, Cornell chicken, to sponge candy, and concord grape pie.

I’ve been collecting Chicken Francese (Chicken French) recipes for years, but never felt the urge to recreate chicken french in my own kitchen, because I associated it with dining out so strongly. But like many others, spending more time at home and eating out less the time seemed right to give these recipes a try.

What Is Chicken Francese (Chicken French)

Chicken French is a popular Italian-American dish that is found on restaurant menus throughout the Upstate New York, and my personal favorite dish to order when I am dining out. The recipe is a creation of the Rochester NY Italian-American immigrants, and is an adaptation of veal french that was served in New York City after World War II. The Brown Derby restaurant on Monroe Avenue in Brighton is thought to be the first to put chicken french on the menu, after anti-veal picketers urged a boycott of the restaurant in the 1970s.

Chicken French or Chicken Francese features tender thin chicken cutlets that have been dredged in flour, and dipped in egg and then quickly sauteed, and served with light, lemony white wine pan sauce. Chicken french is typically served with pasta or rice pilaf, a crusty bread and vegetable side such as broccoli.

The History of Canandaigua Chicken French

This recipe for chicken french comes from Alexander Bacon, former executive chef at Nolan’s on Canandaigua Lake. This Canandaigua version of chicken french has been handed down through Bacon’s family for generations, and originated from the Honorable John Raines (1840-1909) from Canandaigua. Raines is remembered today not only for his service in the New York State Senate, but also for his immaculate taste. Raines owned two of the most beautiful houses in Canandaigua – the Octagon House on the corner of Gorham and Wood streets and Thendara, his summer retreat on Canandaigua Lake.

Raines’ great-grandnephew Alexander Bacon shared the recipe with Life in the Finger Lakes in the May/June 2019 issue of the magazine. While this is an excellent chicken french recipe, there seems to be either a typo or omission in the printed version, which calls for the addition of garlic in the cooking instructions, but fails to mention garlic in the ingredient list. When I tested this recipe I left the garlic out of the pan sauce, and was completely happy with the results.

How To Make Chicken French

Making restaurant quality chicken french at home is surprisingly easy, and can be made in about 30 minutes.

Chicken French was made with sherry at the Brown Derby, but a dry white wine is the go-to main ingredient for the pan sauce in Canandaigua Chicken French and Proietti’s in Webster. When selecting a dry white wine for chicken french look for a dry, crisp white wine. Rich, oaky whites, such as chardonnay can become bitter during the cooking process, while sweeter white wines like Riesling may caramelize during deglazing or change the flavor of the pan sauce with added sweetness.

My favorite white wines for chicken french are Pinot Grigio, Sauvignon Blanc, and unoaked Chardonnay. It may seem counterintuitive, and in New York State will require a trip to the liquor store, but avoid purchasing grocery store wines labeled “cooking wines,” as they often contain high amounts of salt and other preservatives. If you are unsure when you are shopping ask for an unoaked, dry, medium-bodied white wine at the liquor store.

If you don’t have wine, or prefer a nonalcoholic option, you technically can substitute the wine with chicken broth. Although it is worth noting, the wine adds amazing depth of flavor to this dish, and the substitution will definitely affect the end result. When it comes to chicken french, many chefs agree, wine in the sauce is the most appropriate ingredient for the job.

Chicken French is best served immediately. You can store any leftovers in the fridge, but the coating on the chicken may soften over time.

This recipe is credited to Chef Alexander Bacon & originally appeared in the May/June 2019 issue of Life in the Finger Lakes.

This was a very simple yet delicious recipe. I think next time I might double the sauce as I liked to let the chicken sit in the sauce at a simmer for a while and it gets soaked up easily! Thank you for a nice recipe!

Hi there! Making this tonight after we returned from six weeks in Fairport. :-) I am assuming you mean 1/4-1/2 CUP of wine? I am pretty sure, but it might be bottle. ha! :) I am hoping it is not bottle, because I was planning on drinking the rest of the bottle after I measure out enough for the recipe. :-)

Have A Good Day

I'm a native Rocheseterian who's lived in Ohio since 1974. I made this recipe last evening and it was outstanding. I served it with a side of mashed potatoes and mixed vegetables. The lemon sauce brought all of the tastes together. Thanks for sharing it online.

made this for dinner tonight. it is better than anything i have had at a restaurant. thank you for this recipe! definitely five star!!!!!

So glad you enjoyed it! It is one of my favorites!