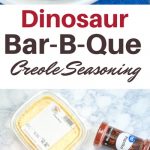 New York State may not be the first place that comes to mind when you think about Creole Seasoning Blends, but with the mention of the Dinosaur Bar-B-Que suddenly it all makes perfect sense.

I have been slowly gathering local recipes from so many different sources, but my all time favorite place to find Upstate New York Recipes might surprise you. It is incredibly low tech, but I have been having great success! My secret source for lost Upstate New York Recipes? Goodwill and second-hand bookshops!  I am usually on the hunt for church cookbooks, one of my favorite genres of cookbooks. But occasionally I stumble upon a gem like Tastes of the Town: Favorite Recipes from Rochester’s Best Restaurants, Caterers, and Bakeries.

The Tastes of the Town cookbook was a fundraiser for The Visiting Nurse Service Meals on Wheels in 2005, and is loaded with local recipes. I have a long list of recipes to try in this cookbook, in fact, I think more pages have been bookmarked with a post-it note, than haven’t! But I knew I had to make the Dinosaur Bar-B-Que Creole Seasoning Blend away.

Serving Southern-style meats & draft brews in a biker roadhouse vibe restaurant, Dinosaur Bar-B-Que is an Upstate icon with humble beginnings. Founder John Stage and a small group of others started the biz in 1983 in Syracuse. The idea to start a food business was born at a large motorcycle gathering near Albany, the founders felt that while they are on the road, bikers deserve a good plate of food, and they could offer it. So the founders of Dinosaur Bar-B-Que took to the road, and operated as a mobile concession stand, selling barbecue that was cooked in a 55-gallon drum that had been cut in half and served as a grill.

As the popularity of the southern style barbecue plates grew so did the business, the Dinosaur eventually settled into a permanent location in 1988 in downtown Syracuse, N.Y In 1998, they opened the Rochester store; in 2004, they opened the Dinosaur in Harlem. Now with 9 locations across upstate New York, the Dinosaur is now the destination for slow-smoked meats, homemade sides, live music, and, local and seasonal beer.

One of The Dinosaur’s popular sides dishes, cajun corn is seasoned with this Dinosaur Bar-B-Que Creole Seasoning Blend, but this versatile seasoning blend is also great with pork, steak, and seafood, and in any recipe that calls for creole seasoning.

Up until I wrote this I almost always used the terms Cajun and Creole interchangeably in culinary discussions, but it turns out they are not one and the same, the two seasonings are pretty different, and it all boils down to herbs.  With Cajun seasoning, the emphasis is typically on a spicy “heat” with the inclusion of more peppers, while creole seasoning includes more herbs like oregano, bay, basil, thyme, rosemary, and parsley. Basically, if you are looking for something spicy, you’re more likely to enjoy a cajun seasoning.  If you want something more rounded out with a depth of flavor opt for creole, like this Dinosaur Bar-B-Que Creole Seasoning Blend.

Recipe Source: Tastes of the Town: Favorite Recipes from Rochester’s Best Restaurants, Caterers, and Bakeries (No longer in Print)

I do want to try the cajun corn recipe, it is also in the cookbook, but I think I am going to hold out until our sweet corn is in season, I think it would be so delicious with fresh corn!

Do you have any local recipes?  If you have a recipe you are willing to share, shoot me an email, or leave it in the comments, you will be credited as the source of the recipe when I publish,  and I will be eternally grateful.