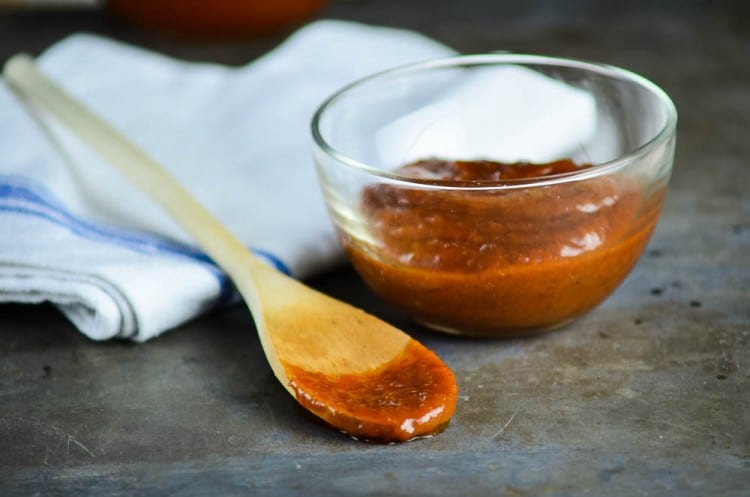 I think rhubarb season is winding down, but I want to share this Rhubarb Barbecue Sauce with you just in case you have some you are still trying to use up! Rhubarb Barbecue Sauce is a thick and tangy barbecue sauce that is surprisingly easy to make.  I have been making many of my own homemade versions of pantry staples for a while now, but for some reason,  it never occurred to me to attempt my own BBQ sauce until recently. I am finding there are countless BBQ sauce recipes available, with flavors and varieties far exceeding even a fraction of what is offered at the typical super-market, and they are so good. I have been missing out for so long!

Rhubarb barbecue sauce may sound a little unusual, but it does not disappoint, especially when paired with pork or chicken. The first time I used Rhubarb Barbecue Sauce was on grilled chicken and it was really good, and I will be using it again on chicken.  I found though it works especially well when paired with fatty meat, like pork tenderloin. The tangy sauce offsets the richness of the meat perfectly. One of my favorite meals so far made with rhubarb barbecue sauce is was a pork roast I made in the slow-cooker. I just subbed my rhubarb sauce in for the raspberry chipotle sauce in this recipe, everyone loved it, and it was so easy!

Have you made your own barbecue sauce? What is your favorite variety, traditional Memphis or Kansas City style, or do you like the more unusual flavors too?

This BBQ sauce is fantastic! It’s the perfect marriage of sweet and tangy. It is reminiscent of the hallmark sauce made by the Chinese restaurant we frequented when I was a kid. Thanks for the delicious recipe.

This sounds delicious. Too late for rhubarb but will try the frozen. Do wish you could tell me the yield you get from one recipe (This would be very helpful on all of your delicious dishes) Thanks VERY much....so glad I found you.