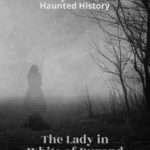 Rochester’s Lady in White is haunted tale of a heartbroken mother desperately searching for her lost daughter on the shores of Lake Ontario.

From the haunted gravestone of the Lady in Granite, to the creepy abandoned Insane Asylums there is a slew of spots that have a captured our imagination and have a paranormal activity across the Finger Lakes region.

Folklore, local legends are commonplace among small, tight-knit communities throughout the world. While some legends are immensely different, others share a surprising amount of common traits. The Lady in White is one of the later. The legend of a heartbroken female ghostly apparition has similarities to tales relayed from generation to generation in many countries worldwide.

We can trace ghostly stories of a Woman in White back to Europe, North America, South America, Russia, East Asia, and Southeast Asia. All versions feature a ghostly woman dressed in white who suffered a painful loss while she was living. Some of the women are perpetually waiting for their sailors to return home from sea, while others were victims of accidental death, betrayal by a husband, or died an untimely death at the hands of another.

Our local Upstate New York version has a heartbroken mother, named Eelissa, who is rumored to be searching for her lost daughter. She can be seen wandering the lakefront of Eastman Durand Park, looking for her missing daughter.

The story of the haunted park takes place in Upstate New York. Between the cities of Rochester and Irondequoit on the shores of Lake Ontario. For generations, stories of sightings of a woman in white roaming the beach of the 977-acre Durand Eastman Park have been shared.

In the early 1900’s Dr. Henry S. Durand owned a Boy Scout summer camp in the area, which is now Durand Eastman Park. Dr. Durand was convinced by his friend George Eastman that Rochester needed a public park with access to a lakefront beach. The duo bought surrounding farmland and offered the property to the City of Rochester in 1907.

Rochester spent roughly a year developing the predominantly swampy farmland into a diverse park, with wooded slopes, valleys, scenic vistas, small lakes. The park was officially dedicated May 22, 1909, and it is now a beautifully sprawling recreation area with many activities for families and visitors. Durand Eastmane has also earned a repuation as a paranormal hotspot, thanks to the White Lady.

The story goes back to the 1800s, and revolves around a woman named Eelissa, who was a farmer’s wife who lived in the area. Lore says Eelissa’s daughter disappeared, although the story has a couple of different theories about how she disappeared.

The daughter’s age and the circumstances surrounding her disappearance vary among different tellings. In the most popular version, the teenage daughter asked if she could walk down to the lake. As the story goes, she never came home. The mother went out to search but couldn’t find her.

In all versions, the mother spent the rest of her life looking for her.

Regardless of the version, The White Lady roams the lakefront to this very day, searching for her missing daughter. She has been known as a more menacing spirit towards men but appears to women as a sorrowful spirit on her never-ending search for her daughter.

Because every ghost needs a castle, the stone foundation remnants of an old refectory (dining hall) have been nicknamed the White Lady’s Castle and has become a popular tourist attraction and party site for teenagers.

The Irondequoit town historian Patricia Wayne says there is no historical evidence that Eelissa ever existed. However, there are numerous sightings every year of the infamous Lady in White on the shore of Lake Ontario at Durand Eastman Park.

The Lady in White On The Big Screen

Spooky season is the perfect time to snuggle up and binge on classic Halloween movies. If the Lady in White isn’t on your Halloween watch list, you might want to add this vintage thriller with local ties to your playlist!

Rochester, New York, native Frank LaLoggia weaved the legend of the White Lady of Durand Eastman Park into his thriller that was filmed primarily in the County seat of Wayne County, Lyons, and various areas around Rochester.

In the movie, an author recounts how, as a young boy growing up in a 1960s small town, he was locked in a school closet during Halloween 1962, where he witnessed the ghost of a young girl and the man who murdered her years earlier. He soon finds himself stalked by the killer, and drawn to an old house where a mysterious Lady In White lives. As he discovers the woman’s secret, he soon finds that the killer maybe someone close to him.

I think the film is often underrated, but as of writing this, you can currently stream the “Lady in White” on Max Go, The Cinemax Amazon Channel, DIRECTV, and Spectrum On Demand. So you can check it out for yourself! Make sure to let me know what you think of the film if you do watch it!