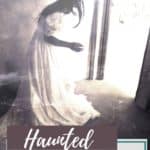 It’s no secret Upstate New York has many haunted locations. From the haunted gravestone of the Lady in Granite, to the creepy abandoned Insane Asylums there is a slew of spots that have a supernatural past all across the Finger Lakes region.

In the spirit of the season, I thought it would be fun to round up a few of the most popular haunted locations in our area.

Seven miles east of Lyons is a bed-and-breakfast frequented by tourists and ghost hunters alike. The Smith-Ely Mansion built in 1858 in Clyde, NY by a wealthy doctor. The property is currently owned by a local real estate investor who has renovated the stately mansion into a bed and breakfast.

It is reported that the original inhabitants of the house haunt the grounds. During the most recent restoration of the mansion, the workers on the renovation project reported hearing and seeing strange unexplainable events.
» More info

The only convicted murderer ever to be executed in Wayne County was Willaim Fee, near the jail in 1860.

Parts of the scaffold on which William Fee was hung were made into chairs, one of which is still housed in the former jail, now the Wayne County Museum, where it is believed William Fee still walks the cellblock, of the small county prison.
» More info

The Phelps store and Palmyra Historical Museum offer double the spooky fun, with evidence of spiritual happenings and paranormal activity recorded by several groups of investigators.

The store is said to be hunted by Sibyl Phelps, an eccentric local spiritualist, who passed in 1976. She lived the majority of her life in parents’ home above the store and never married. Sibyl never strayed too far from the house and, when she did, she wore old-fashioned dresses and wide-brimmed hats. Sibyl was intensely interested in spiritualism, reading everything she could about the subject, and was rumored to be psychic locally.

Ghost hunts can be booked year-round for anyone hoping to hear strange noises and capture spirit orbs, are those semi-transparent white balls seen floating around in many photographs of the Willaim Phelps General Store.
» More info

Ready to experience unexplained phenomenon right in your own car? In Yates County, if you drive your car along Route 364 to Middlesex, then turn left on South Vine Valley Road and left on Newell Road, you’ll find a big hill where your car rolls backwards up the hill.

Look for Spike Road down the hill, stop just before the sign and leave your car in neutral to get this spooky experience. Legend has it the site is near an old Native American burial ground.
» More info

The Utica Psychiatric Center, or “Old Main” as it is known locally, opened in 1843 and closed in 1978. Thought to be progressive at the time, the asylum practiced extreme medical treatments and procedures such as lobotomies, and a treatment device known as the Utica Crib, a coffin-like wooden bed with a cage around it. It is thought that the tortured souls of former patients still wander the halls and grounds of this house of horrors.

“Old Main” reopened to the public in June of 2014 for annual tours of the former lunatic asylum, which has been a huge draw for history buffs and paranormal investigators.
» More info

Legend has it the 977 acre park in Rocheser is haunted by a “White Lady,” the ghost of a woman who once lived in the 3 Lakes Pavilion (also known as the White Lady’s Castle) near Lake Ontario. According to local legend, she lost her daughter (to kidnapping, murder or ran away) and continues to search for her while dressed in all white. Rochester native Frank LaLoggia turned the tale into the 1988 movie, “The Lady in White,” most of which was filmed in Wayne County.

Belhurst Castle’s spooky vibe is so well known, it is #6 on USA Today’s National List of the most haunted hotels in the country. The most well-known ghost thought to occupy Belhurst Castle, is Isabella, an opera singer who died in a collapsing tunnel. She’s often spotted wearing white and walking the shores of Seneca Lake or standing in the front lawn at night.

The origin story of Esperanza Mansions’s haunting is uncertain but there are some who believe that there is a woman ghost, decked out in white, (why are they always wearing white?) wanders the property.

Built in 1838 by John Nicholas Rose, a farmer from Virginia who became one of the area’s wealthiest citizens. The Rose family lived in the mansion on the estate until 1870. Since, the Esperanza Mansion has been home to a art gallery, winery, and bed and breakfast. Currently, the Esperanza Mansion is a wedding destnation, hosting weddings on the lawn overlooking Keuka Lake.

No one knows who the ghost is or her story, but it is widely beleived the grounds of the Esperanza Mansion are haunted.

Have you visited any of these haunted spots? What are your thoughts

Great post! I grew up in The Finger Lakes and am familiar with many of these sites.

Wish the previous commenter would stick to the topic of the post!

D, Thank you so much, I really had fun writing that post! I agree that the comment you are referring to is not relevant to the post, and I have removed it.