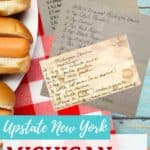 We are traveling WELL outside the Finger Lakes region with today’s recipe. Today we are exploring the Northern New York roadside stand favorite, the Michigan dog!

If you aren’t from New York, the chances are high you may not have heard of a Michigan Dog, and I can’t wait to introduce you! It’s a tasty summertime drive-in staple with a long history and a huge fan base.

What is a Michigan Style Hot Dog?

A Michigan Style Hot Dog is Northern New York regional specialty! It consists of a steamed hot dog, served on a New England Style bun, topped with a meaty sauce, generally referred to as “Michigan sauce”. Michigans are commonly served with chopped onions and mustard. If served with chopped onions, the onions can either be buried under the sauce, under the hot dog itself or sprinkled on top of the sauce.

Where does the term Michigan hot dog come from?

Like almost every other Upstate New York Regional Dish I have ever written about here on the blog, the history of the Michigan hot dog are murky. But there is a generally accepted story as to how hot dog called a “Michigan” a ended up in Nothern New York.

Garth and Eula Otis, who were originally from Detroit but came to the Plattsburgh area from the midwest in the early 1920s are thought to be the creators of the Michigan Style Hot Dog.

Before moving to Upstate New York, Mrs. Otis had learned to make a special meat sauce for a hot dog known in Detroit as a “Coney,” or a “Coney Island.” Over time, she perfected her own distinct recipe and after settling in New York, Mr. and Mrs. Otis opened a hot dog stand on Lake Shore Road in Plattsburgh in 1925.

It’s likely that the Otis’s assumed no one in the Plattsburgh area at the time would know what the heck a “Coney” was, so they simply called them a “Michigan style hot dog.” As locals caught on to the tasty treat, the name was quickly shortened to “Michigan,” and they were off and running. The couple’s first stand was aptly called the “Michigan Hot Dog Stand,” which was later changed to the “Michigan Red Hot Stand”.

Jack “Nitzi” Rabin (also known as Irving J. Rabinowitz) was hired as a carhop by Mrs. Otis, and eventually, she sold him the business AND her secret recipe.

Nitzi knocked down the Otis’ original little hot dog stand and established what eventually became the present-day Nitzi’s / McSweeney’s in 1935. “Clare and Carl’s” opened across the road in 1942 while Nitzi was off fighting in World War II. Nitzi, however, had one final contribution to make; unsatisfied with the hot dog buns that were available at the time, he went to a local bakery (Bouyea’s) and contracted them to make a special New England style “Michigan” roll designed to his own specifications. Thus, the “Michigan” was born.

What Kind Of Hot Dog Do You Use For a Michigan?

Most of the places serving a Michigan style hot dog use Glazier’s hot dogs. These unique Red Hots are immediately identifiable by their bright red natural casing, and are deserving of a post all their own! Glazier’s is a family-owned business that manufactures hot dogs and other products in Potsdam, NY.

Glazier’s is also a full-service food distributor, distributing not only their hot dogs, but also a wide variety of other products within a 100-mile radius of the Potsdam area, which means finding Glazier’s hot dogs in other areas can be very difficult.

As for the hot dogs themselves, the natural casing of Glazier’s gives the dog it a distinctive “snap” when you bite into it, and gets its red color thanks to Red Dye #3. The dog is made of a combination of pork and beef, and has a surprisingly flavorful taste with garlic undertones.

What’s the difference between michigan sauce and garbage plate sauce?

The recipes I share here are based on recipes I have found, reviews, and my personal trial and errors with recipes.

Local restaurant recipes, are undoubtedly, some of the most popular recipes here on the blog, they are also hands-down the most difficult to obtain from the source. Chefs are notorious for guarding their culinary secrets, and many of our once loved establishments are no longer around.

Replicating a locally loved restaurant creation—intended to be cooked by professionals, with professional tools and appliances for large crowds of people— comes with its own unique set of challenges. As home cooks sometimes tweaks are made and we use what is available, and makes sense for our home kitchen situation, but still turns out a very authentic-tasting result.

I love my slow cooker, but it has a serious disadvantage when it comes to soups, stews, and sauces that are traditionally cooked on the stovetop and simmered down. The lid on the slow cooker traps the steam, which drips back into your sauce, so it never really cooks down and you end up with a sauce that is a little on the watery side.

To prevent a bland and watery slow-cooked Michigan sauce, prop the lid open with a wooden spoon or chopstick to let steam escape as it’s cooking. This will allow the liquid to reduce and result in a thicker, and more flavorful sauce.

You can also cook Michigan sauce in a slow cooker. Follow the instructions, but cook for on low for about 6 hours.

Michigan sauce is a pretty thick sauce when it’s done, and doesn't have clumps of meat, that's why the potato masher is the best tool for this job.

This recipe makes a fairly large batch. You can freeze Michigan sauce in small portions to enjoy later. A typical serving of Michigan sauce is roughly 1/4 cup, so I freeze 4 servings (1 cup) in a freezer-safe plastic storage container.

My recipe above is a very close adaptation of Nitzi’s Orignal Michigan Sauce Recipe, but influenced by a couple of other old recipes I found floating around the internet. You can find them all below. I love coming across these old handwritten recipes on the interwebz. Of course, I can neither confirm nor deny their origins.

Where to get a Michigan In Upstate Ny

If you find yourself in Northern New York, make sure to check out one of the local stands to get an authentic Michigan!

I grew up in near Plattsburgh and running across this recipe is a blessing and a curse. On one hand I am very homesick, but can now introduce my husband and children to real Michigans so I call it a win lol.

Grew up in Plattsburgh. My brother worked at Clare & Carl's in high school and college. This brings back some great memories. Here's Clare's recipe that my brother passed on to me:

I make this sauce in a dutch oven (you can use a large pot too). Put all ingredients in the dutch oven, cover and cook on low-medium heat for 1-2 hours. Do not brown the meat, just put in the pot with all the other ingredients. Stir sauce every 15 minutes while cooking. This recipe makes a lot of sauce. I normally cut it in half. Enjoy!

This is an EXCELLENT recipe. I added a little salt to taste at the end ... perfect!

My mom was born and raised in Plattsburgh. She met my father on the Air Force Base that sadly is no longer there. They married and moved to Rochester after his enlistment was up. Michigans are definitely a northern NY thing, not many people know what I am talking about when I tell them I'm making Michigans for dinner. They are delicious! Her recipe is a little different though. It's just ground beef, ketchup, mustard and tomato paste. Thanks for the history on them, I didn't know the whole backstory.