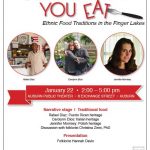 I recently attended a narrative stage discussion on ethnic foods in the Finger Lakes, organized by the New York State Folklore Society. The event, You are What You Eat held at the Auburn Theater, was really enjoyable, and found the whole experience informative, so I thought I would share my observations and takeaways. 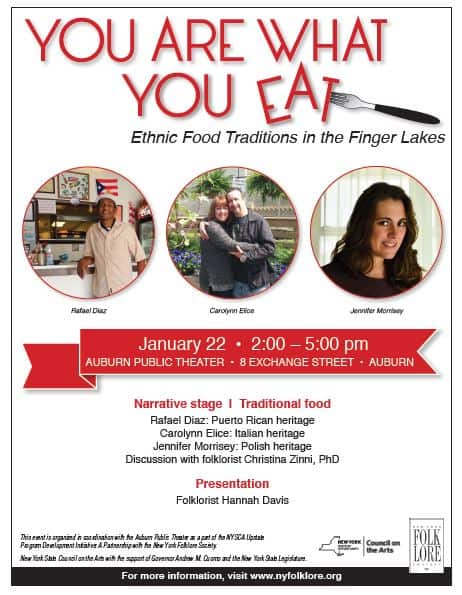 I realize immigration and integration are contentious issues lately, but the fact remains immigrants shaped our region, from the building of the Erie Canal to the Utica Greens served at restaurants, you don’t have to look hard to find the contribution immigrants made to the society and culture of our area, and continue to. I was intensely interested in hearing first-hand stories, and sharing my own family’s immigration story and the ethnic food traditions that have lived on. The Finger Lakes is, much like the rest of the nation a melting pot, and knowing your family’s unique place in the melting pot is a gift to be celebrated and preserved.

In the time leading up to this event, I thought a lot about my own family history, and I even doubted my “eligibility” to participate in this conversation.  I suspected instantly my story would be different from the other participants. Our family has been quick to “Americanize”. My Great Grandmother barely spoke English, yet here I am a mere 3 generations later, with only a few polish words at my disposal, and a couple of polish dishes that were always served at holidays and special events. Surely, I knew the participants would come with handwritten recipes, long-running traditions, and stories of family activities, that would make my story look like that of a 4th generation Pole gripping at whatever shreds of culture and heritage I could scrap together for the sake of preservation.

But let’s face it, that IS my story, and if we are being entirely honest, it is probably a more common story than I have realized. I understood if I am to share my story with 100% honesty I am the woman who is looking to better understand previous generations of my family and the history of where I come from, with little to go on.

The other participants, Rafael Diaz a native of Puerto Rico and owner of the restaurant El Morro in Geneva,  and  Carolynn Elice of Auburn Elice, an active member of the recently established Cayuga Italian American Organization had fascinating stories and brought an amazing assortment of foods. Carolynn told stories of making pasta (by hand!) with a pasta board and learning this skill from her mother in law. Rafael talked about coming to our area from Puerto Rico to work at food processor and distributor headquartered in Wayne County, and how he quickly began taking orders for the homemade items he made from scratch for his lunch, and built a business recreating traditional latino foods.

My story is a little more convoluted. My Great Grandfather came to America from Poland in 1910, my Great Grandmother followed shortly after and arrived in 1912. They settled in East Rochester, where they grew their family, by 1924 they had 7 children. While my great grandmother was comfortable in her old world ways and continued to only speak in polish and cook on a wood stove, my grandmother and her siblings were eager to embrace all things American. Little got passed down in the form of family history for the time period pre-1910, but a few ethnic dishes survived, being served at holidays and special occasions. In my quest to learn more about my family I dived head first in genealogy, scouring the internet for documents and census forms, and anything that would give me a better picture of my ancestors, but it wasn’t really until this event did I realize that maybe I was overlooking the significance of the recipes that I do have.

A few of the key takeaways from the event… 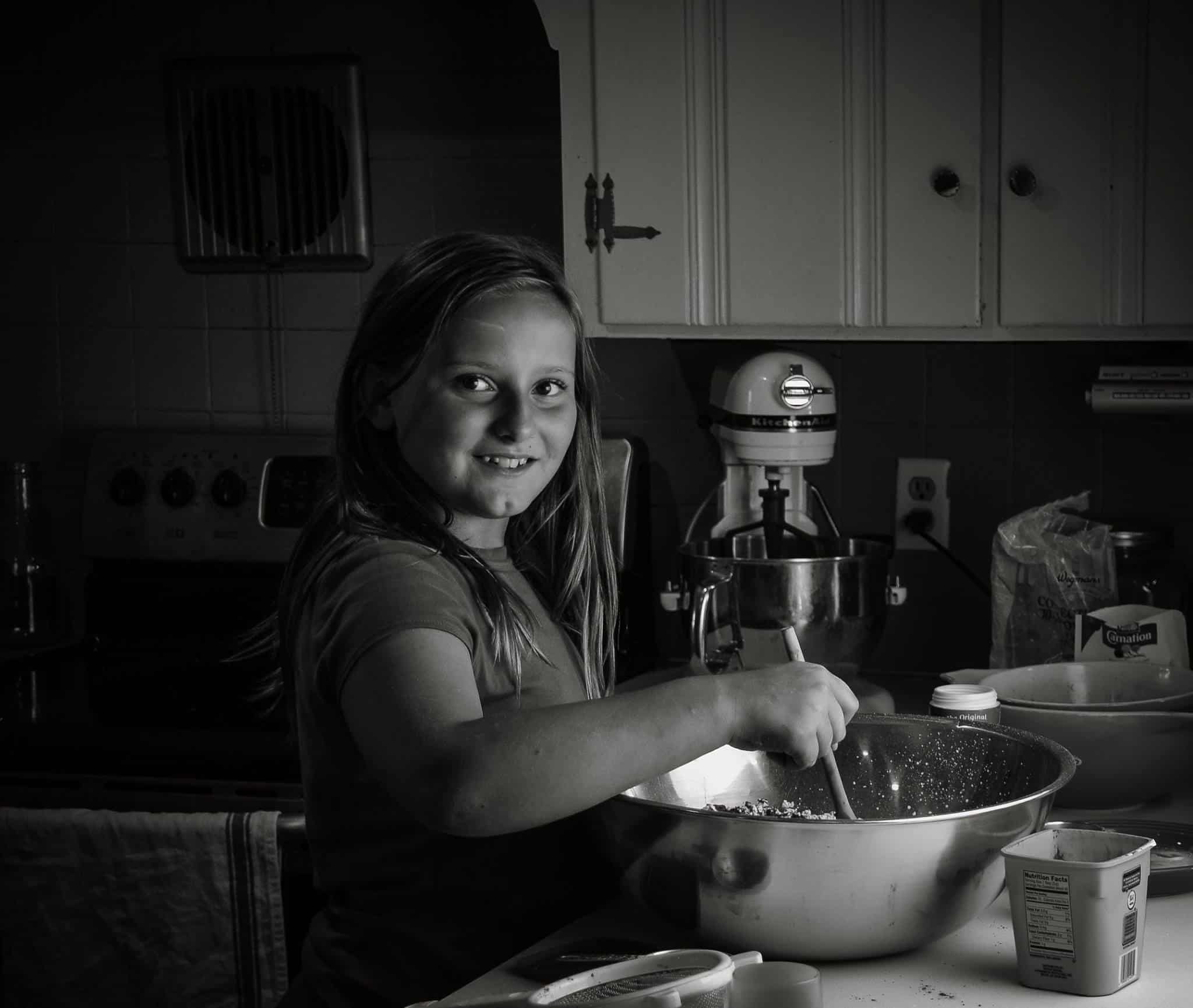 Sharing. I think there is a lot of emphasis on sharing a prepared dish, but what struck me, maybe even more importantly was sharing the preparation of the dish.  When we share the time spent making the food we are reconnecting to our past while strengthening current family bonds. Which leads me to…

Observation. This was perhaps the single most eye-opening realization for me during the event. I think I had always assumed that in most families there is some sort official handing over of the family recipes. In my family and the other participant’s recollections, the passing down of culinary knowledge was much more subtle. We all gathered our recipes and technique simply by observing the process, it was quiet afternoons in grandma’s kitchen or lending a helping hand to a parent when traditional family meals and recipes are handed down to children, grandchildren, and great-grandchildren.
Ever-changing. As time goes by and families grow and change, and so do the foods they serve, but their essence stays the same. The way I prepare Golumpki may change, and yes I cut up Kielbasa and add it to Haluski, so it is more of a skillet meal than a side dish.  The dish may change from generation to generation, but the tradition lives on, and the intent to keep them alive and every bit as current as they ever were when made generations ago are the same.

I was asked if I would write down our family recipes. As a food blogger who has made it my hobby sharing recipes, especially recipes of regional importance this is something that has occurred to me. But then there is this other part of me that is hesitant. I had a hard time articulating why a “food blogger” would not want to document her own family recipes,  probably because I didn’t understand the hesitation myself, that is until I thought about it more. My hesitation to write down these recipes is selfish. When I am making Golumpki I am not thinking about the exact amount of any particular ingredient that goes into the dish, I am thinking “this is the way my mother makes it, and her mother made”, my hope is that future generations will not get caught up in the technical aspects of the recipe, but will instead repeat the motions and the ingredients from their hearts, and not from a piece of paper, and be fully present in the experience. All that being said, yes, I will write down the recipes… 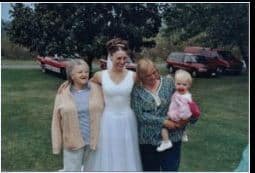 If you find yourself in the same boat as me, looking to better understand previous generations and the history from which you come, with little to work with, If you’re in possession of beloved or long-forgotten family recipe, you may have more than you realize.I encourage you to make good use of them. Don’t let them be lost forever; keep them alive and every bit as current as they ever were by making them a part of your modern day traditions.And if you’re at a loss for the traditional foods of your cultural heritage, do a quick search online the resources are limitless! and make it happen in your own kitchen, it is never too late to start making new memories, traditions and reconnecting with your family, both past and present.

Thank you to Hannah and the New York State Folklore Society for having me, the Auburn Theater for graciously hosting the event. Rafael for bringing an entire buffet of the best latino food I have ever eaten (seriously, check out his restaurant in Geneva, El Morro), and Carolynn for the amazing Italian dishes!

In parts of Wisconsin we can it angel food candy. One of my favorites!