Live! Folklife Concerts are back this Spring with a Thursday evening series of 12 concerts during MarchApril-May, 7 to 9 pm (doors open at 6:30).

The free series is produced and hosted by The Folklife Center at Crandall Public Library in the Community Room downstairs off the Library’s Glen Street entrance, and is made possible with funds from the Friends of Crandall Public Library, and the New York State Council on the Arts –Folk Arts Program with the support of Governor Andrew Cuomo and the NYS Legislature. 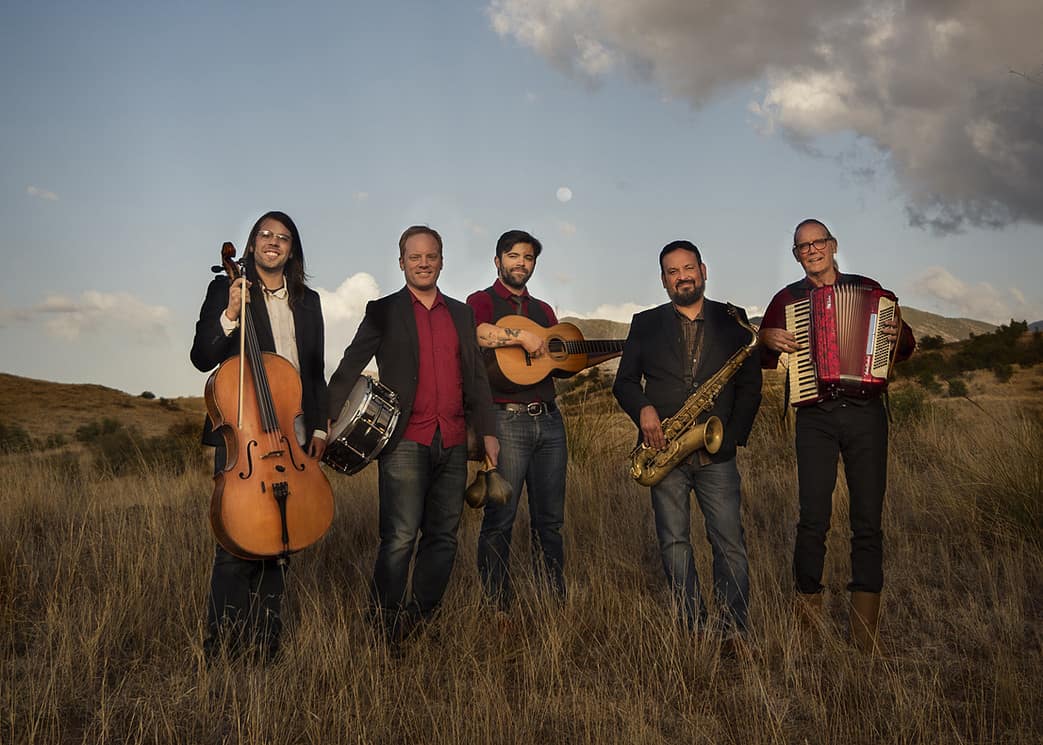 Representing 5 generations of music in North America, Ronstadt
Brothers continues the family’s musical traditions, started by
Michael J. Ronstadt (younger brother of legendary vocalist, Linda
Ronstadt) and his sons, Michael and Petie. They present an exciting
repertoire that preserves the traditional Southwestern and Mexican
songs of their heritage while offering innovative original material.
New compositions place them on the cutting edge of multiple,
blended genres, stretching the boundaries of folk, blues, jazz and
beyond. Rich harmonies sung in English and Spanish are accompanied
by outstanding cello and guitars.

Kitchen Ceili • March 15
http://stanscottmusic.com/kitchen_cil/
As their name implies, Kitchen Ceili serves up healthy portions of
spirited tunes and songs in an atmosphere of unpretentious good
humor. Their repertoire, includes the driving reels and lilting jigs
and hornpipes one would find in an Irish pub session, as well as
stately waltzes, slow airs, and old and new songs of emigrants, soldiers,
lovers, lawyers and computer programmers from both sides of
the Atlantic.. The band features George Wilson on fiddle, banjo and
vocals; Dora Hast on tin whistle and recorders, and Stan Scott on
guitar, mandolin, banjo, and vocals.

Tim O’Shea & Friends • March 22
www.timosheaandfriends.com
Tim O’Shea is from Killarney in the southwest of Ireland. He
has been working solo, and in several bands since the late
1980s. Tim’s repertoire draws from the dance music of his
native Sliabh Luachra and West Kerry folk traditions and the
singing of Irish and Scotish performers like Jimmy McCarthy,
Paul Brady, Dick Gaughan and Andy M. Stewart. He
has toured the USA, Australia, New Zealand and Europe.
“Tim demonstrates excellent versatile musical ability… It
will particular appeal to those who love good Irish music
played well with passion and fervour” – Lewis Jones, Folk
North West Magazine.

Rusticator • March 29
www.rusticatormusic.com
Rusticator is an acoustic band with an Americana spirit.
Stripped back drums and a hollow-bodied bass lend a woody
backbeat, while steady acoustic guitar supports jazz-inflected
fiddle playing and the group’s three-part harmonies. The
four-piece group consists of Tony Califano, guitar, vocals;
Joe Gumpper, fiddle; Brig McCutcheon, bass; Derek Dobson,
percussion. The quartet has been entertaining Capital Region
audiences since 2013 and released their second album, Get it
While it Lasts in August 2017. Rusticator has been featured at
Saratoga’s First Night and Mabee Farm’s Howlin’ at the
Moon concert series.

GoldenOak • April 5
www.goldenoakband.com
GoldenOak, sibling duo Zak and Lena Kendall, born and
raised in the Sandy River Valley of western Maine, started
making music together as kids and the bond of brother and
sister is evident in their carefully crafted songs, poetic lyrics
and flowing harmonies. The success of their first album
Pleasant St. (2016) gained GoldenOak a nomination as “one
of Portland’s most important upcoming bands” by Dispatch
Magazine. In October 2017 GoldenOak released Foxgloves,
voted in December “EP of the Year” by Portland Music
Awards.

Emerald Rae • April 12
www.emeraldrae.com
Emerald Rae is a Boston roots musician, a powerhouse fiddler growing
up in Cape Breton’s Scottish traditions, who at the age of 18 won
the grand prize at the US Scottish Fiddle Championship. She continued
to study music in Glasgow, received a degree from Berklee College
of Music, and collaborated with 3 fellow fiddlers in the group,
Annalivia. Emerald has made a name for herself as a solo fiddler
totally adept not only in Cape Breton and Scottish traditions, but in
Irish and old-time as well. All these influences are heard on her album,
If Only I Could Fly. “Her fiddling is spot-on yet elegantly
earthy” – Boston Globe.

The Sea The Sea • April 19
www.theseathesea.com
The Sea The Sea is an Upstate New York based indie folk-pop duoband
featuring what Huffington Post calls, “Two of the loveliest
male-female voices you might ever hear this or any other year.” Their
2014 debut release, Love We Are We Love, received praise from NPR,
American Songwriter, and No Depression, among others, gathering
nearly 10 million streams on Spotify. Mountain Stage host Larry
Groce calls them “ready to take their place among the best young
male/female duos now performing.” Their 2016 release, the six-song
EP in the Altogether recently earned features by Apple Music including
Best of the Week and A-List Singer/Songwriter.

Che Apalache • April 26
http://www.facebook.com/che.apalache
Che Apalache is a four-man string band based in Buenos Aires with
members from Argentina, Mexico and the United States, including
Joe Troop (fiddle), Pau Barjau (banjo), Franco Martino (guitar) and
Martin Bobrik (mandolin). Che Apalache began as a bluegrass band,
but eventually incorporated Latin American styles into their repetoir.
Combining instrumental prowess with tight vocal harmonies, they
have curated an authentic blend of genres to reflect the nature of their
lives. Evoking images from Appalachia to the Andes, their affectionately
titled debut album, “Latingrass” is testament to a powerful cultural
and musical exchange.

The Nordic Fiddlers Bloc • May 3
www.thenordicfiddlersbloc.com
The Nordic Fiddlers Bloc is a fiddle trio from Norway, Sweden and
the Shetland Islands who swiftly gained a reputation for their gripping
and unique blend of fiddle music since their inception in early
2009. With a firm focus on the rich traditional fiddle music from
where they each belong, Olav Luksengård Mjelva (Norway), Anders
Hall (Sweden) and Kevin Henderson (Shetland Islands) have developed
a sound that has been described as “meaningful”, “intense” and
“invigorating”. Their clever use of harmony, rhythm, riffs and bass
lines creates a sound that leaves the listener enthralled. “On the evidence
to hand, pure fiddle doesn’t get much better than The Nordic
Fiddlers Bloc” – Folkworld. 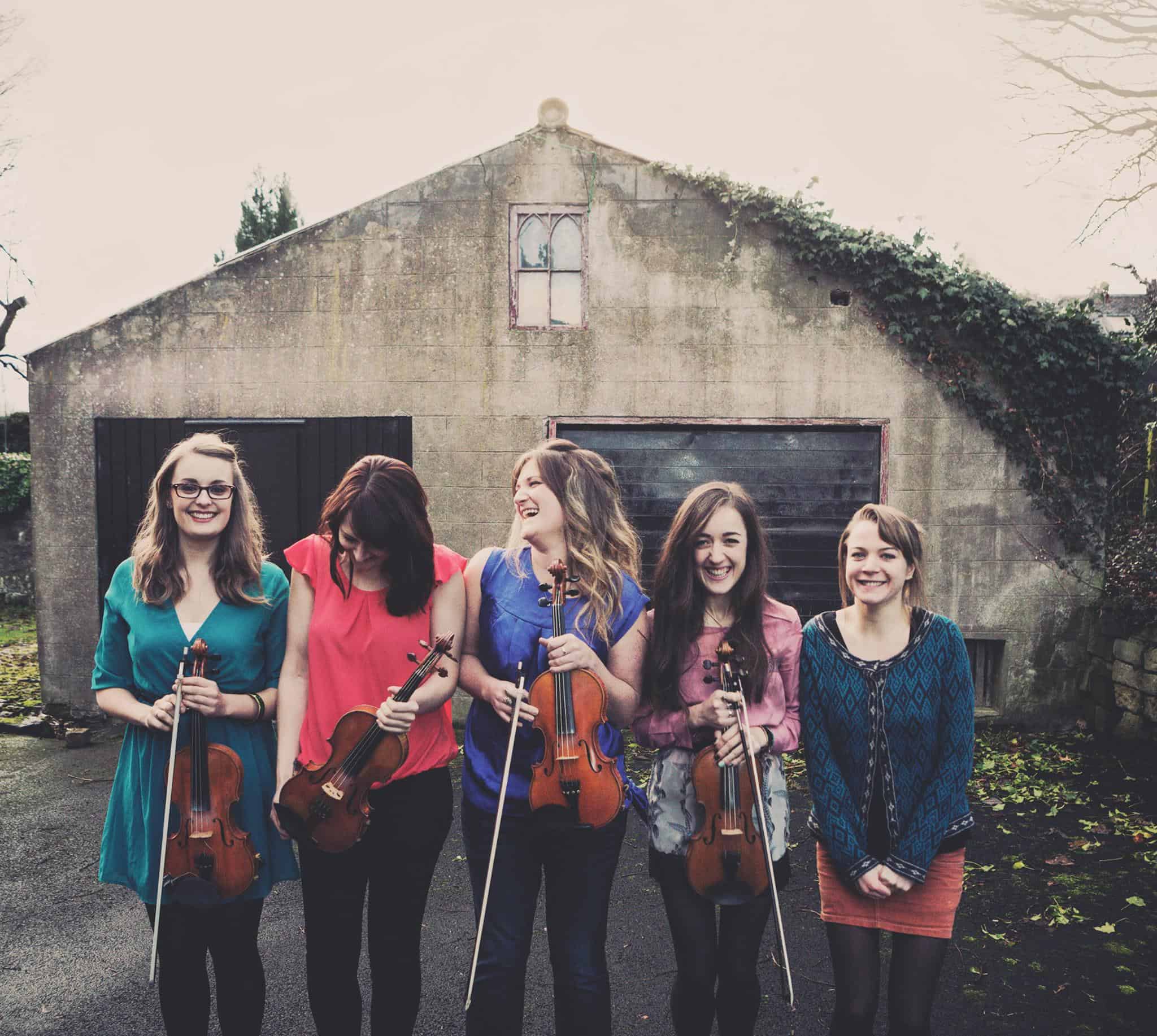 Fara • May 10
www.faramusic.co.uk
Fara brings together four musicians at the forefront of today’s Scottish
folk scene — Jennifer Austin, Kristan Harvey, Jeana Leslie and
Catriona Price’s three fiddles and a piano — to produce a fiery sound
rooted strongly in their upbringing among the music of Orkney. The
four contrasting personalities and individual musical voices in Fara,
make for a colorful melting pot of ideas during arranging sessions —
each member brings a different musical pallet to the table. But the
strong Orkney fiddle tradition that they all grew up with is the glue
that binds them together, being at the heart of all of their musical
characters. With a mixture of self-penned and traditional Orkney
tunes as well as stunning vocals, the young women’s combined musical
experiences and friendships produce a diverse, individual sound.

Techung • May 17
www.techung.com
Techung is a Tibetan folk and freedom singer/songwriter living in
exile in Dharamsala and USA. He is best known for his performances
of traditional Tibetan music, dance and opera. Whether performing in
traditional or contemporary style, Techung’s dual goals are to revive
Tibetan music in the Tibetan community and to expose the rich performing
arts tradition of his homeland to the world community. In
addition to being looked up to as one of the key keepers of Tibetan
musical traditions, Techung is also respected for the original solo and
collaborative music he creates by drawing on both his own heritage
and his familiarity with other world music traditions. Techung performs
regularly at the Tibet House Annual Benefit Concert at
Carnegie Hall, with artists such as Philip Glass and Patti Smith.

As always, I do my best to provide relevant and accurate information regarding events. With any event, dates and times are subject to change, please confirm dates, times, and availability before attending an event. Events are posted on Home in the Finger Lakes from information found on, but not limited to, attraction sites, government city sites; as well as submissions from individual attractions, press releases, and PR firms. All events are subject to change without notice and Home in the Finger Lakes cannot be held responsible.