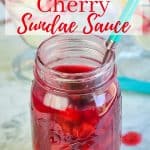 This quick and easy tart cherry sauce is the perfect topping for desserts – use it to top pound cake, waffles, yogurt and ice cream! It can be made year-round with fresh or frozen sour cherries.

Ithaca, has long been known as an area having some of the best dining in Upstate New York, but did you know it also plays a unique role in the history of the ice cream sundae? The college town located on the southern end of Cayuga Lake has extensive history and documentation supporting the claim that the ice cream sundae was created there in 1892.

The claim of “birthplace of the ice cream sundae” is actually a serious matter and point of pride for two very different towns. Unlike the 1000 Islands dressing dispute where 2 neighboring towns claim to be the source of the dressing creation,  the towns in the center of the great sundae debate are separated by a significant distance, but this hasn’t stopped a good-natured rivalry, and while the towns have remained good-humored, the decades-long debate continues today.

In a very condensed version of events Two Rivers, Wisconsin and our own, Ithaca New York both claim to be the origin of the creation of the ice cream sundae.

Ithaca is the first city in the United States to have documented evidence of the ice cream sundaes creation. The documents discovered by two Ithaca high school students include:

How the Sundae was Created

According to local stories and an old letter from the Platt clerk to historian John Brooks describing his account of the ‘Cherry Sunday’, On the Sunday afternoon of April 3, 1892, after services at the Unitarian Church, Reverend John M. Scott paid his usual social visit to the Platt & Colt Pharmacy in downtown Ithaca. The shop owner, Chester C. Platt, was also the church treasurer and he met often with Scott for talks after Sunday services. Seeking a sweet treat for himself and the reverend, Platt asked his fountain clerk, DeForest Christiance, for two bowls of ice cream. But instead of serving the Reverend plain vanilla ice cream, Platt took the bowls and topped each with cherry syrup and a candied cherry. The finished dessert looked and tasted delicious—so much so that the men decided the new creation deserved to be named. After some debate, Scott suggested that it be named for the day it was created. Platt concurred and the first “Cherry Sunday” was born.

While I don’t have the original recipe for the cherry syrup that was used in the first cherry sundae, I do have a recipe I think you are going to love. It is delicious over ice cream and absolutely perfect with pound cake, and crazy easy to make. The recipe is an adaption of one I ran across in Cooks Country, the original recipe uses sweet cherries, but you know how I love sour cherries.

Why, the corn syrup? The addition of corn syrup to the cherry sauce helps prevent the sugar from crystallizing, so it will pour smoothly.  Like all refined sweeteners, corn syrup is best consumed in moderation, however, if you feel strongly you can always swap out the corn syrup for equal parts honey, agave nectar, or a simple syrup made with water and granulated sugar, but none of these substitutions will prevent the crystallization of sugar in the sauce.

This sauce can be refrigerated for at least a week. The sauce is best served at room temperature, let it warm up on the counter. If the sauce is to be served warm, pour it into a medium saucepan and heat over low heat, stirring frequently, until warm and smooth. To reheat a sauce in the microwave, pour it into a microwave-safe bowl and heat, uncovered, for 20 seconds. Stir and repeat in 15- to 20-second increments until the sauce is warm and smooth. If using frozen cherries, completely thaw cherries, do not drain.