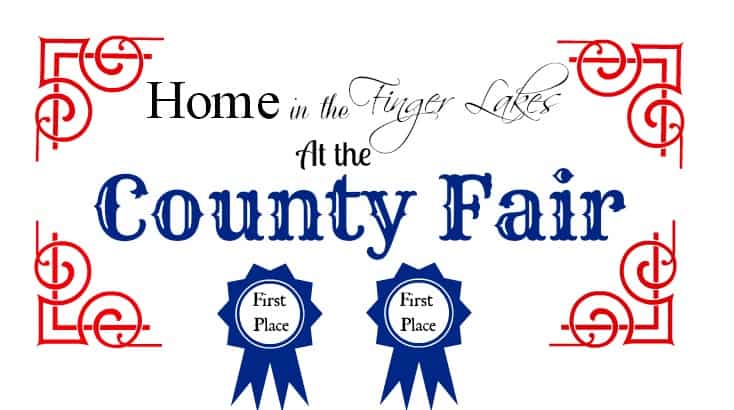 Have you missed me? Ok, probably not. We have been enjoying the County Fair this week, and it has been a good week. We have won some ribbons, ate way to much junk food, rode some rides, and had a nightly social hour every day this week. It has been nice, the kids needed a break from the farm, and honesty so did I.

Monday morning I entered 2 quick breads into the open class domestics competition. My Double Chocolate Zucchini Bread and  Apple Praline Bread(I will be sharing this recipe a little later this week!). I had originally intended on entering a little more than just those two items but had ended up driving my daughter around getting supplies for her hay bale decorating competition, when I had planned on baking. Both breads did excellent, and took a first place ribbon! I was told that the Apple Praline Bread was in the running for Best of Fair along with a Pina Colada Cake,  but the the cake won Best of Fair.

My daughter’s hay bale. Hello headache! She had signed up to do this hay bale decorating contest at the fair. You could work as a team or individual, and there were very little restrictions. Only non-toxic paint and adhesives, and no permanent changes to the ground the bale sits on. Seems easy enough, right? She was determined to work alone and set on a flower pot theme, with the round bale actually being the pot and flowers “growing” up out of it. A trip to the lumber yard to get dowels and the dollar store set us back $20 and gave us ample materials to work with. Once home nothing worked the dollar store foam was to thin and floppy, the poster board was to thick and would not easily cut with scissors. We were getting down to the wire, I suggested we abandon the flower pot theme. My daughter was frustrated and ready to try a new angle and agreed. When I realized she was struggling to think of a new theme, I offered up a minion. I had been playing with the idea of a minion quilt for a while now because of their simple shapes. They are perfect for crafty type stuff, and highly recognizable by kiddos.

She ran with the minion idea, one more trip to Wal-mart, and another $10 dollars on yellow plastic party tablecloths, yellow duct tape and black pipe cleaners,  And it was not long until we had a hay bale that really looked like a minion. She was very happy to take 3rd place, and I think she did an awesome job! You can seem her bale below.

The last few days of the fair I had to lay low. I was dealing with some tummy troubles that really knocked the wind out of my sails for a while. A quick trip to my doctors and many antacids later I am starting to feel like myself again. But I feel like I have been handed a loud and clear wake up call by my body. Time to clean out and shape up. I need to make my health a priority.