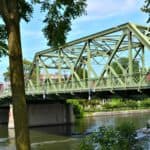 This was not on my Summer Bucket list, but I am glad I we stopped to check out this Finger Lakes gem as we were driving by. I do regret not spending more time  in the historic little town of Seneca Falls, but checking out  George Bailey’s It’s a Wonderful Life Bridge was fun! Have you ever played tourist in your region? We have driven by this bridge maybe a handful of times over the past year, but never really stopped to check it out. Because we are doing stay-cations and day trips until the corn slows down, I thought  playing tourist in our own area would give the kids  a chance to have some fun and see our usual surroundings in a brand new way, it also has a nice side benefit; we are all learning about local history which I am finding fascinating.

The Town of Seneca Falls

View Larger Map
Seneca Falls is located in Seneca County.  The east town line lies against  Cayuga Lake with the town of  Waterloo to the west.  Seneca Falls is the birthplace of the woman’s right movement, but also thought to be the  inspiration for the fictional village of Bedford Falls in Frank Capra’s holiday classic movie “It’s A Wonderful Life.”

It’s a Wonderful Life The Movie

In the movie It’s a Wonderful Life George Bailey  is deeply troubled. Prayers for his well-being from friends and family reach Heaven. Clarence Odbody, Angel Second Class, is assigned to visit Earth to save George.  Convinced he “worth more dead than alive” because of a life insurance policy George contemplates suicide from a steel trestle bridge. Before he can leap, Clarence jumps in first and pretends to be drowning. After George rescues him, Clarence reveals himself to be George’s guardian angel.  Clarence shows George what the town would have been like without him.

My Visit to George Bailey’s Bridge

It is hard to not notice the streets around the bridge all have names like Angel Avenue,George Bailey Lane & Clarence Street .

A plaque on the bridge that reads

“The village of Seneca Falls may have inspired the hometown look of Frank Capra’s 1946 holiday film classic, It’s a Wonderful Life. Mr. Capra is known to have visited here in the mid-1940s, at the time the screenplay was being developed. Many similarities exist between Seneca Falls and the fictional “Bedford Falls.” Among these are the design of the Bridge Street bridge, the use of several place and personal names and the village’s geographical location”

In a pivotal scene in “It’s a Wonderful Life”  a suicidal George Bailey played by Jimmy Stewart  is saved by the intervention of an angel named Clarence Oddbody on Christmas Eve.

This plaque on one of the side railings of the bridge intrigued me, when I got home I Googled Antonio Varacalli. This is what I found:

Kind of rings a bell, doesn’t it?

Our visit was picturesque.  Not at all like the scene in the movie. But with a little imagination, you can picture the bridge covered in snow,  the bitter  Upstate New York winds, an icy canal below.

Every year Seneca Falls celebrates “It’s a Wonderful Life”. This year  the festival takes place  December 13th- 15th. There will be appearances by the “Bailey Kids” and others associated with the film, holiday activities, and Christmas dinners! There are lot of fun activities planned, and I am very excited to attend again this year!

More facts and fun things to do  and see in Seneca Falls:

The Real Bedford Falls– Official site of It’s a Wonderful Life Festival, lots of  info and schedule of activities.

Woman’s Rights National Park-In 1848 Elizabeth Cady Stanton and four other women invited the public to the First Women’s Rights Convention to discuss expanding the role of women in America. At the end of the two days, 100 people made a public commitment to work together to improve women’s quality of life.

I'm no relation to Suzanne Blanchard, our names are merely coincidentally the same.

That said, Seneca Falls is very clearly NOT the location of Bedford Falls in the movie. The location of the movie's fictitious Bedford Falls is clearly established by a road sign visible as George runs through the snow back to his house after his nightmare sequence. This sign points to nearby towns of Aspetuck and Kitchawan to the left of main street and Katonah and Chappaqua to the right.

Where are all four of these New York and Connecticut towns located, you ask? In Westchester County NY and Fairfield County Connecticut... on the eastern side of the state.

They are the true sources of Capra's Bedford Falls.

I don’t begrudge Seneca Falls it’s fun and profit, but there are actually many upstate NY towns that have most of these elements. My grandfather’s folks ran a building and loan in Oneonta for generations that fits the bill, and Oneonta looks just like Bedford Falls. There’s actually a George Bailey in insurance in Dryden. And lots and lots of towns have iron truss bridges, mills, brick storefront downtowns, canals, and mills. What no town that I’ve seen in central NY (where I was born) is a bridgekeeper or toll house. Seneca Falls doesn’t, nor Dryden, nor Oneonta. And Califon, NJ where the short story author said he set the story, doesn’t. One place that has lots and lost of iron truss bridges with (still active) bridgekeeper’s houses is the Delaware River from the NY line to the Trenton Makes the World Takes bridge. Capra intentionally avoided naming the town, and I think that’s the way it should be. It’s everybody’s home town.

@Suzanne Blanchard, But there’s nothing wrong if it is the town.

Could you suggest any lodging within Seneca Falls close to town for the weekend of Dec 9th - 11th ?

Hi Frank, there are a few of the "national" hotel brands in the Seneca Falls area, and 3 Bed and Breakfasts, with Barrister's Bed & Breakfast right in the heart of Seneca Falls (although, I doubt they will have any rooms available during the Wonderful Life Festival).

My top picks for lodging (based on historical interest, atmosphere and ideally positioned to activities):

The George Bailey Bridge, an Upside Down Traffic Light, and Places only Slow Roads will Take You | In The Finger Lakes

[…] a Wonderful Life” fan? It’s one of my favorite Christmas movies! Jennifer Morrisey from Home In The Finger Lakes wrote a lovely post about George Bailey’s bridge in Seneca Falls. Read that […]

[…] twice a year I usually take a trip to Sauder’s in Seneca Falls to stock up on baking supplies.  I buy large containers of cinnamon, ginger, and nutmeg, pounds […]