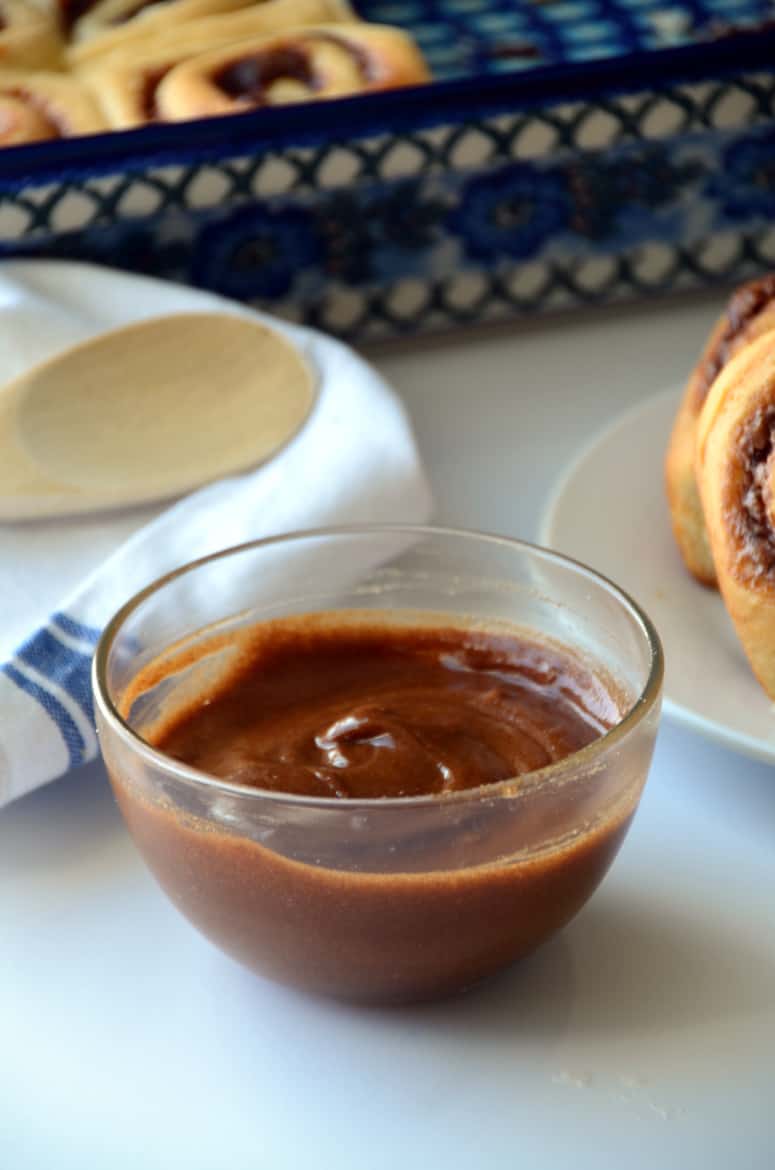 Oh my gosh, this cinnamon roll filling is it, guys!

I love cinnamon rolls, but I could never figure out how to get the consistency of the filling right. some fillings turned out too dry and baked right into the dough, and some too thin and would run out of the roll to the bottom of the pan. I wanted cinnamon rolls with really thick and gooey cinnamon filling.

I thought my problems were solved with I stumbled upon King Arthur’s Baker’s Cinnamon Filling, this stuff is amazing, think mall cinnamon rolls.  My only problem? $10 + shipping to make 5 loaves of bread.

You know I love mixing my own versions of stuff up in my kitchen, and I have been itching to come up with a copycat of Baker’s cinnamon roll filling. It took me a while to figure out how to get a  schmear like filling, and it actually happened when I was cleaning out my kitchen cupboards and ran across some instant clear gel left over from canning season.

A very strong word of recommendation when working with instant clear gel. They are not kidding when they say INSTANT.  It is highly concentrated, and requires no cooking or heat to thicken. ALWAYS mix instant clear gel with sugar before adding any liquids, or you will have a sticky sloppy mess on your hands.  I buy my Instant clear gel at my favorite Mennonite bulk foods store, but you can order it on Amazon. I would be willing to bet Instant clear gel is exactly what is in King Arthur’s Baker’s Cinnamon Filling.

At the risk of sounding like our favorite FoodNetwork host, this is one of those situations where you really want to use the best cinnamon you can get your hands on. I mean cinnamon rolls are supposed to be cinnamon-y, right?  I am a fan of Saigon cinnamon, if you are looking for something you can pick up at the store Spice Islands Saigon Cinnamon is the best I have found on my grocery store shelves.

Looking for a super easy and good yeast dough to go with this filling? I will be posting my favorite cinnamon roll recipe Thursday, You will love it!

So then when you fill your Cinnamon rolls, is this all you use, or do you spread butter too?

What is clear gel? Do you mean gelatin?

How much will this recipe make? I just wanted to make a little at a time to swirl into the batter of a small coffee cake. ~Wasn't sure how I needed to adjust the measurements.

Does this have to be baked? Just wasn't sure if the clear gel was safe to eat. I want to use it for a cupcake filling. Also, what is the approximate quantity it makes? About a cup?

Sounds like just what I was looking for. This will fix my dry cinnamon rolls! Please note - Saigon Cinnamon is very high in a substance called COUMARIN (not to be confused with medical Coumadin). Coumarin is a substance that can cause liver damage or complete liver failure. Recently the FDA issued a warning concerning this and advising limiting the amount of cinnamon that people should use. The danger is highest for those taking cinnamon capsules to help control their blood sugar and those on a blood thinning regimen as cinnamon has a blood thinning effect as well. I have been using Ceylon Cinnamon for about 7 or 8 months and Love it. Price isn't too bad either, at least not as much as I use it. If you are interested in more information this is where I found it: CINNAMON VOGUE INC 2780 S JONES BLVD # 3687 LAS VEGAS, NV 89146 United States WWW.CINNAMONVOGUE.COM